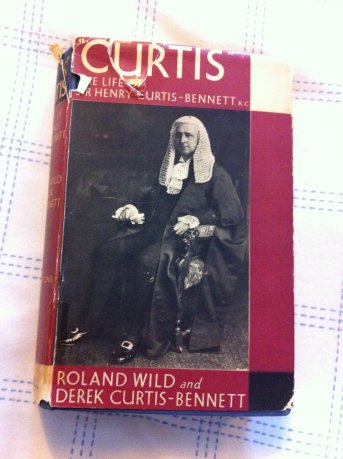 Sir Henry Curtis-Bennett might be forgiven for not really knowing ‘how the poor live[d]’ in 1888. He had been appointed a magistrate for Westminster just two years previously at the age of 40. In 1888 in fact he was ‘Mr’ as the king didn’t knight him until May 1913 just a few weeks before he died. He was the son of an Essex  vicar and read law at university. He was called to the Bar in 1870 and so had plenty of experience (as all the metropolitan magistrates did) in the legal system, if not in the day-to-day life of ordinary Londoners.

In November 1888 he was presiding at Wandsworth when young George Thomas Bellenger was brought before him, charged with ‘living beyond the control of his parents’. The gaoler brought him up from the day cells and informed his worship that the lad was half starved. Until that morning he’d not eaten for days and so had been glad of the meal that Mr Ironmonger, a local Industrial School officer had provided.

The officer had been to George’s parent’s home and found it to be in a terrible state. There were several children there, all ‘crying for food’ and he reported that the place lacked the basic ‘necessaries of life’ (by which I presume he meant food and heating).

If the family were destitute then surely they should have gone to the workhouse Mr Curtis-Bennett declared. The gaoler said his worship was correct but added that many of the poor were ‘disinclined to become inmates of the workhouse’.

The magistrate said he was aware of this but couldn’t understand it. After all in England the poor were looked after better than in any other country in the world. Here there were ‘workhouses, infirmaries, and dispensaries’. This was the extent of the ‘welfare state’ in 1888: there was no unemployment benefit, no state pension, no NHS. Instead if you unable to feed yourself or find shelter you could enter the ‘house’ where you would treated (despite the former barrister’s opinion) little better than prisoners were.

George’s mother was called forward to explain her situation. She told the magistrate that her husband was out of work. He had been employed by a mineral water company as a delivery man but he had been sacked after eight years’ service. The reason, she was asked?

‘He trotted the horses’.

‘For no other reason?’

So because he pushed the horses to get his rounds done more quickly they company had sacked him. Workers had few, if any, rights in the 1880s and unemployment was high so there were always people to fill gaps if employers wished to get rid of people or pay them lower wages.

At this Mr Curtis-Bennett had a temporary rush of charitable understanding. He awarded the woman 10s from the poor box. Then he sent her little boy to the workhouse.

Henry Curtis-Bennett died in office. He had become the Chief Magistrate at Bow Street and in July 1913 he was a attending a meeting at Mansion House (seat of the Lord Mayor of London) when he fell ill. He had survived a bomb attack in 1908 orchestrated by militant suffragettes (and other attempts as he was a lead magistrate in suppressing their ‘outrages’) but he didn’t survive this latest assault on his constitution. 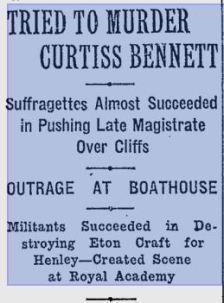 He died soon afterwards and was succeeded by his eldest son, also Henry, who went on to be a more famous lawyer than his father and a Conservative politician.

His son – Derek Curtis-Bennett) followed in his father and grandfather’s footsteps and entered the law. As a defence barrister he famously defended (if not successfully) the traitor William Joyce (Lord Haw-Haw) and the murderer John Christie.

No one knows what happened to little George or his siblings, or if they even survived the winter of 1888.