In fact he was so tired that he felt he needed, and deserved, a holiday. Sadly for him his employer, the North London Metropolitan Tramways Company thought otherwise. Workers had no statutory right to any holiday before 1938, and even that (one week a year) was hard fought and well below the minimum the Trades Union Congress had campaigned for. By contrast today the law states that ‘almost all workers’ are entitled to 28 days of annual leave.

The only way George Carter could get the rest he felt he required was to effectively quit his job, or at least stop working for a while. So on the 1st November 1875 George, who worked as a conductor collecting the fares on the trams, met with his supervisor and told him he was taking some time off. Mr Thomas Bradley, his inspector, said he found have to place someone else on his route and demanded he hand over any outstanding fares.

Carter was holding onto £3 15s 6d of the company’s money but he wanted to know what would happen if he left to have his well-earned break. Would he be discharged, he asked? If so he was going to keep the money.

At the Worship Street Police Court, where Carter appeared to answer a summons from the tram company, it was revealed that it was company policy to extract a £5 deposit from all the conductors prior to them starting their service. Presumably they were a distrustful lot and didn’t like the idea of their staff walking away with their money. Mr G. H Smith, the manager of the company, had  declared that he would be sacked and his wages and depots forfeited. It was this that had prompted the summons and the court case.

So inspector Bradley already had George’s money, indeed he had more than the £3 15s he was demanding he hand over. Moreover the tram company’s employees were forced to sign a document that made the bosses the ‘sole judges in any dispute’ and gave them power ‘to order the forfeiture of the deposit-money and all wages due’. Even in a world with zero-hour contracts and firms like Uber this was a terribly uneven distribution of power between employers and employees and the magistrate was appalled by it.

‘it was ‘very one-sided’, Mr Hannay said, ‘putting the men in the position of slaves without hope of redress in a court of law’, and it had been remarked upon a number of times in that court.

But there was nothing in law to stop the tram company setting the rules as it had; trades unions hardly operated  effectively in the period and it wasn’t until later in the century that they began to flex their muscles with any real hope of success. So all George Carter could do was withdraw his labour and hope to be reemployed at a later date by someone, if not his current employers.

Mr Hannay opted out of the debate; he said he had no power to adjudicate here and so dismissed the summons. As far as he could see the company had Carter’s £5 and he was hanging on to a ‘lesser sum’. If they wanted to pursue him for the fares he retained then they would have to do so in the county court, at their own expense. It wasn’t exactly a victory for the ‘little man’ but it was reported as an example of sharp practice by an employer than many people reading this would have been family with.

Whether that inspired them to look for alternative forms of transport in the future is questionable, but the publicity was hardly good for Mr G. H. Smith and his company were tainted by it, just as Mike Ashley’s appearance in front of the Business, Innovation and Skills (BIS) Select Committee in July 2106 did nothing for the reputation of Sports Direct.

Trades Unions get a lot of stick, much of it well deserved. But we should remember that every single right that workers have today – to holidays, sick pay, pensions, safe conditions at work, training, and equal opportunities, have been extracted from the capitalist class by determined workers backed by union representatives. It is not for nothing that nearly every Conservative government since the second world war has attempted to curb the power of the unions in some way or another. Despite their claims of ‘one nation Toryism’ the Conservative and Unionist Party represent the ‘haves’ (like G. H. Smith) rather than the ‘have-nots’ (like George Carter). 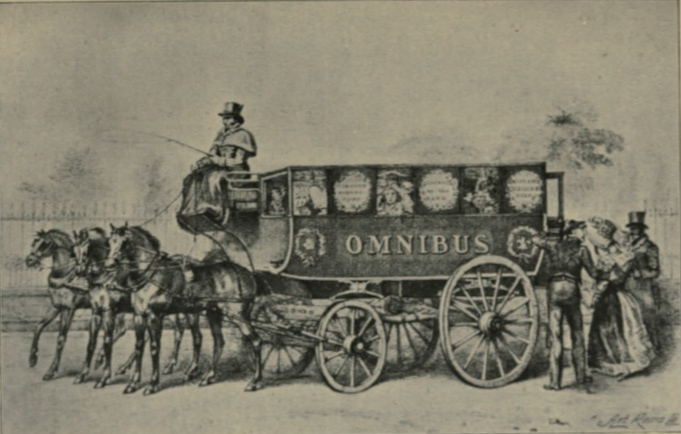 The London Police Courts did not sit on Christmas Day but the Boxing Day papers were still published for Victorian fathers and grandfathers to read over their breakfast of devilled kidneys and smoked haddock and eggs. And so the editors included stories from Christmas Eve, to keep their readership amused, entertained and informed about the ‘doings’ of the courts and the thieves, brutes  and loafers that were the staple of most crime news in the mid-1800s.

On Boxing Day 1853 the breakfaster would have opened his paper to read about ‘the Omnibus Trick’.

A Mr Ayres and a Mr Douglas appeared at the Hammersmith Police Court to protect their business and their reputation. The pair were joint proprietors of the Hammersmith Omnibus Association which ran red buses on a variety of routes across the capital. They had turned up because they had heard that the magistrate at Hammersmith had recently complained about the tactics deployed by some of its operators to entice the public to travel with them.

The magistrate, Mr Paynter, had been at Hammersmith, close to the turnpike gate, when a bus passed with a sign attached to the rear which read:

Underneath this in very small letters was also inscribed:

His Worship thought that this was rather misleading advertising as it ‘convened the idea that the fare was only 4d from Kensington to the Bank’ whereas that fare only applied when the vehicle reached Sloane Street ‘which was some way off’. In his eyes it was a ‘trick’ to lure unwary passengers on board. And it seems to be working he added, as several of his fellow passengers that day were surprised when the conductor asked them for more than the minimal 4d to travel to the heart of the City.

The owners of the Hammersmith Omnibus Association were equally scandalised by the practice which, they assured Mr Paynter,  was not of their doing. The ‘trick’ was, they insisted, being perpetrated by a rival company (which also used red omnibuses) and was clearly designed to ‘injure the reputation of their association’. Both partners had attended on Christmas Eve specifically to protect their reputation and deny any shenanigans on their part.

When his worship told them that he had seen two buses carrying the same message (the second with the ‘from Sloane street’ script album obscured) Mr Douglas quickly explained that two rival buses did indeed travel one after the other along that stretch of the route so he was sure they were to blame.

The justice seemed somewhat treasured but still unhappy. He told the men that the conductor on the bus he had taken was ‘very impertinent’ and had he not been a magistrate he might well have summoned him to court. He had taken the numbers of the two buses and he handed these over so that Ayres and Douglas could make sure they were not vehicles owed by their company. The men promised to look into the matter  and then thanked the magistrate for his time and left.

I’m a little surprised that the magistrate was using public transport but I suspect it reveals that the relative inexpensiveness and convenience of the omnibus service was something that appealed to Londoners of all classes. The first horse drawn service) in fact running to the Bank from Paddington) had opened in London in 1829 (a few years after a similar scheme started in Paris) but rival firms ran individual ‘buses for many years before larger conglomerates started to appear.

The first of these was the London General Omnibus Company which started business in 1855 (a couple of years after this case came to court). Within a year of opening the LGOC was running 600 of the capital’s 810 omnibuses; this was the real beginning of a London-wide public transport system.

For me this story has echoes of the modern day dispute between private transport operators. The traditional London tax (the ‘black cab’ ) is being squeezed by private hire companies, mostly notably Uber, who seek to operate at lower fares but with less regard for the ‘service’ they provide or the people they employ. While ‘cabbies’ are still required to learn ‘the knowledge’ Uber drivers rely on satnavs and are accused of taking circuitous routes and ramping up fares for passengers. There are other accusations aimed at them and (as this interesting article suggests) plenty of other reasons why a ‘black cab’ is better than an Uber. But you can make up your own minds, just as justice Paynter did in 1853.