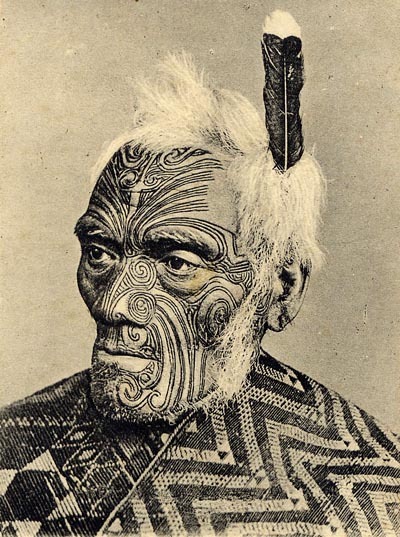 When a man named Burns appeared before the Union Hall Police magistrate on a  charge of being drunk and disorderly, he caused quite a stir. Burns (his first name was not recorded by the court reporter) declared himself as English, and he spoke perfect English, but his appearance was that of Maori warrior.

His face was tattooed in the Maori fashion so that he resembled ‘a New Zealand chief’. How had he come to allow himself to ‘be so disfigured’, the Chief Clerk wanted to know. Well, he replied, ‘it was better than being eaten’. With that dramatic start Burns then gave a brief account of his life and travels, and of what had brought him to London in July 1835.

In 1829 Burns was a sailor on a ship that ran into trouble and was wrecked off the New Zealand coast. He and six others made it to shore but everyone of his companions were killed by the natives. For some reason however, Burns’ life was saved on the intervention of one of their captors and he quickly adopted the local ‘manners and customs’ in order to survive, with, he added, one exception. He refused to eat ‘the bodies of the enemies of his tribe slain in war’.

There were contemporary reports that the Maoris practised cannibalism up until the early 1800s so Burns may have witnessed this. He may also have been playing on popular representations of the savage for effect.

Having settled into the community, he continued, he was soon adopted as a chief. In order to take up this new position he ‘was compelled to undergo the painful operation of tattooing, which was performed with such skill that it is now impossible to distinguish his visage from that of a native’.

As a senior member of the tribe he also learned to master the Maori war canoe and this led to his escape. One day, when he and several other canoes were patrolling along the coast looking for enemies, he spotted a western ship in the distance. He tricked the others into canoeing  off in one direction before turning his own canoe towards the sailing vessel and paddling hard. He quickly got himself out of reach of his former companion’s spears and made it to the ship. The crew helped him on board but it took him some time to convince the Spanish captain that he was indeed and Englishman and not the Maori warrior he appeared to be.

Eventually the Spanish ship had dropped him off in England and he had made his way to London where he now intended to exhibit himself at the Surrey Zoological Gardens. He told the justice at Union Hall that he would be dressed in the ‘costume of New Zealander, and [would] display his dexterity in the management of the canoe, and perform other feats which he had acquired during his six years residence amongst them’.

The magistrate declared that he could not deprive the public of such an entertainment and dismissed the charge against him.

The early 1800s were a time of war for the Maori peoples. Much of this was bloody internal fighting as the rival tribes acquired and used Western guns on each other. ‘Tens of thousands’ died in the so-called ‘musket wars’ of the 1810s, 20s and 30s, at just the time Burns was shipwrecked. Western weaponry was not the only killer however: disease also took its toll of the native population.

From the 1840s onwards tribal rivalry was expressed less in warfare and more in economics but by then New Zealand was increasingly being dominated by European interests. After the purchase of land at Auckland in 1840 the European population grew steadily, and many Maoris left. By 1858 there were more white faces than Maori ones. British policy was to acquire land the Maori deemed worthless or ‘wasteland’, and while there was continued fighting between the Maori settlers and the newer European colonists for most of the rest of the century, there was only ever going to be one final victor.