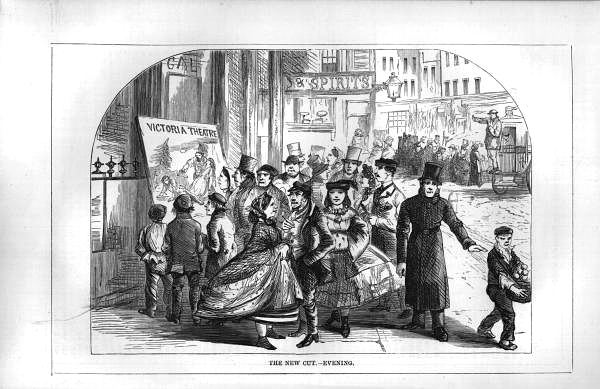 One of the key themes that is emerging from the Digital Panopticon conference in Liverpool (where I am at the moment) is the critical importance of being identified as someone with previous criminal convictions, however petty. In the nineteenth century the British state’s ability to track ‘known offenders’ increased and while defendants might try to avoid being recognised as such (by offering a false name or denying being convicted previously) the arrival of professional police forces and a more bureaucratic justice system gradually entrapped the late Victorian and Edwardian offender in ways that his or her Georgian ancestors might have escaped.

The police and magistracy were important agents in this process as the summary courts of London (the police magistrate courts) were the arenas were criminal careers were established. We can illustrate this in the case on on young man who was brought before the Mansion House in September 1839, the year that the nomenclature of ‘police magistrate’ was official established.

William Jones was reported to be a ‘notorious pickpocket’ when he appeared before Sir Peter Laurie in the City of London’s premier magistrate court. Sir Peter, who later served as Lord Mayor was sitting in on this occasion for the incumbent office holder, Sir Chapman Marshall. The Charter‘s reporter recorded that William was:

‘One of those well-dressed thieves whose appearance never excites attention’.

In other words William blended in with the crowds in central London which enabled him to get close to his victims and get away without being noticed. On this occasion however, he had not been so lucky and had been arrested by a City police officer.

Whilst the PC was taking Jones and another suspected thief into custody however, he managed to slip his custodian and escape. His bid for freedom didn’t last long though, being ‘known to the police’ meant that William was soon tracked down to a well-known haunt of his, a public house associated with local criminals.

He was brought before the Sir Peter at Mansion House charged, it seems, with running away from the policeman. The magistrate asked him what he had to say for himself.

‘I couldn’t help running away’, William told the alderman, adding: ‘It was my business to run away if I could. It was the officer’s business to prevent it’.

‘But you know it is an offence to make an escape from an officer?’ he was asked.

‘Please you, my Lord, if you were in my place wouldn’t you try to get away yourself? I’m blessed if you jist [sic] wouldn’t’.

Sir Peter turned to the collection of police officers gathered in the court and declared: ‘I suppose this young man is well known?’

This was confirmed by the police who said he was known for ‘constantly parading about the streets with other well-dressed thieves, and sometimes thieves of the other sex’. This sounds to be very like a description of the so-called ‘swell mob’ described by Dickens and many others as a mid nineteenth-century phenomenon.

William knew what was coming; even though he had not been convicted of a crime as such (he was not charged with theft from the person for example) his mere association with the ‘swell mob’ and identification as a local thief meant he could expect to be sent to prison as a suspected criminal.

‘Aint a body to go to draw a breath of air on a warm day but he must be pulled [i.e. arrested] for it?’ William complained. ‘Well, I’m, sure, if a man acts bad once in his life, he never gets over it’.

And of course this was true, lads like William Jones were in and out of the justice system over the course of their (often short) lives being arrested on suspicion, prosecuted for petty thefts, being fined, imprisoned (often by default of not having the money to pay the fine), and then progressing to more serious crime and, ergo, longer prison terms. Before the late 1850s many might have ended up being transported to Australia or, later, serving long periods of penal servitude in a convict prison. After 1869 the habitual offenders register dogged the footsteps of convicted felons and eventually photography and then fingerprints (from the early 1900s) made it even harder for those caught up in the justice system to ‘go straight’ and avoid future convictions.

Sir Peter sent William Jones to the City Bridewell, or house of correction, telling him (and the newspaper’s readership) that ‘this shows the value of never having acted dishonestly’. This of course was a luxury young men like William could hardly afford growing up poor in an unforgiving city like London.

Several of the historians gathered for the Digital Panopticon launch have made the point that history has a lot to say about recidivism and the ‘making’ of a criminal. The ‘convict stain’ and the albatross of previous convictions made (indeed continue to make) it hard for those who make one or two mistakes in life to get back on track. Sadly, policy makers today don’t seem to want to listen to the evidence of history.