Victorian era tricycles (these ones are American however)

Anyone that knows Holborn Viaduct will realise how busy it can be at any time of the day. Most of the images we have of it from the late 1800s show it as being crammed with omnibuses, carriages, carts and pedestrians just as today it is full of buses, cars, taxis and vans. I’m not sure ‘road rage’ was a thing in the 1880s but even if the term didn’t exist it seems that the phenomenon did.

John Breece was a middle-class man who worked as a shipping agent in Cornhill in the City fo London. On the evening of the 15 May 1882 he was crossing the Viaduct on his way home from work when he was almost run over by a man riding a tricycle. In the 1800s tricycles were a popular form of transport, and not merely reserved for children.

The man who nearly collided with Breece was Mr Charles Abraham Mocatta and he cycled inland out of the City every day, as many thousands do today, and was on his way home. These sort of near misses (and actual collisions) are commonplace in the 21st century city as cyclists whizz through red lights or neglect to look out for pedestrians as they cross the road.

Breece was so angry at nearly being run over that he thrust his walking cane through the spokes of Mocatta’s wheels, capsizing the bike and sending its rider to the ground. A furious Mocatta found out his assailant’s name and issued a summons to bring him before a magistrate.

The pair were reunited at the Guildhall Police court on Saturday 27 May where Breece was formally charged with assault. He countered that Mocatta was going so fast and heading straight for him that he merely used his stick to defend himself. The cyclist insisted that he ‘was going very slowly or the injury to himself [being thrown from his bike] might have been very serious’.

Sir Robert Carden presiding found Breece guilty and fined him 10s but refused Mocatta’s request for damages on a technicality: he had summoned the other man for an assault, not criminal damage. If he wanted compensation he would have to pursue the case through the civil courts. I’m sure he was legally correct but I wonder also if he had seen the cyclists hammering up and down London’s streets and felt some sympathy with the defendant here.

For other cases involving cyclists at the Police Courts see:

The menace of cyclists in Victorian London 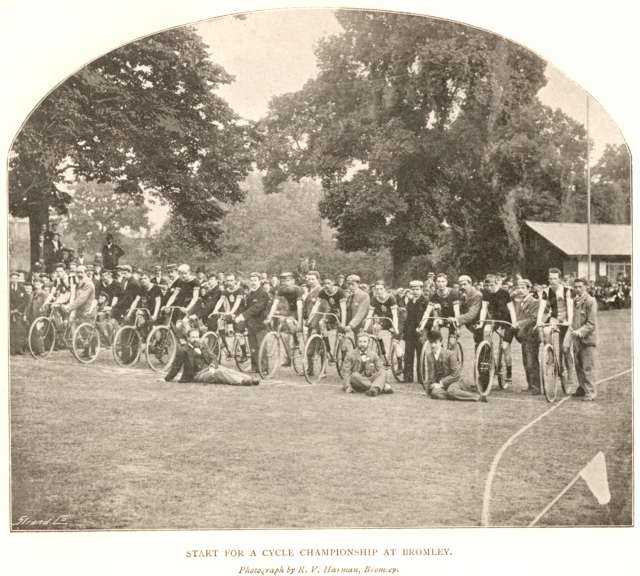 Today we are used to seeing Lycra-clad cyclists weave through traffic queues or clog up country lanes riding two abreast. I have been shouted at whilst riding my bike and cut up by impatient motorists to the extent that now I rarely venture out on two wheels. However, it seems that  road rage towards cyclists is nothing new.

In August 1876 members of the London Bicycle Group were heading off for a race when they passed along a  stretch of road near the Welsh Harp in Hendon. The St Alban’s stage coach came along beside them with several passengers sitting outside (as was normal).

As Mr Gee (the secretary of the cycle club) went past the coach one of the gentlemen on board swung a rope with an iron ball attached. Gee swerved, to avoid the ball hitting his wheels, but instead got the force of coach driver’s whip across his shoulders.

Another member of the cycle group was no so lucky. As the coach went past the man again swung his rope and caught Mr Mitchell’s bike in the wheels. The bike and rider were dragged along for a few moments before the rope snapped. Mr Mitchell’s ‘clothes were torn, his leg injured, and his bicycle was damaged. This occurrence provoked laughter from the coach passengers’.

The cyclists pursued the coach to Edgware where it was stopped and they went to find a policeman. However the constable was less than helpful, refusing to act as he hadn’t seen the incident himself and ‘no marks of violence were visible.

Mr Gee had come before his local magistrate at Marylebone Police Court to ask his advice.  Mr Newton told him that Mr Mitchell could ‘bring an for injuries and damages’ against the man on the stage and Gee could apply for a summons from the local authorities. The cyclists thanked him and left.