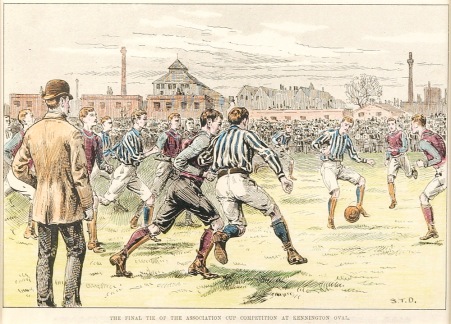 Yesterday Manchester City completed an unprecedented clean sweep of the domestic trophies for men’s football in England. In beating Watford 6-0 at Wembley they emphasized their dominance in professional football in this country and equaled the record for the largest winning margin in an FA Cup final (held by Bury who beat Derby by the same score in 1903). City epitomize the modern game: they are a team of millionaires playing for club that is owned by an oil rich nation, who play in a league that is funded to a large extent by the revenue it draws from selling the TV rights to subscription media companies like Sky and BT Sport.

Never before have the players and fans of football clubs been so distant (economically and socially) from each other. In 1883 Blackburn Olympic won the old FA Cup final, beating the Old Etonians 2-1 at the Kennington Oval after extra time. The final was significant because for the very first time a working-class team (and a northern one at that) had won against a team of  ‘gentlemen’ amateurs. In fact the Old Etonians were the last amateur club to win what was then the most prestigious trophy in English football. Thereafter football changed and northern or midlands teams went on to win the prize until 1901 when a little known southern non-league side won it, beating Sheffield United after a replay at Burnden Park in Bolton. Spurs’ victory in 1901 was a rare one for southern teams and the north and midlands dominated the history of the FA cup, at least until the modern era.

While today’s newspaper will be full of pictures of celebrating Manchester City players (and images from last night’s Eurovision song contest – something our Victorian ancestors did not have to suffer!) the papers in 1883 would have given much less space to football than ours do. It was a very popular working-class pastime but the 1883 final drew a crowd of just 8,000 to south London, and of course it wasn’t on television or the radio. Instead perhaps contemporaries would have lapped up the latest news from the police courts in 1883 as they digested their breakfast or supper, or sat around with their friends in the pub.

In May 1883 they might have read about the antics of three members of the Army Commissariat and Transport Corps who were set in the dock at Westminster  and charged with stealing from the stores at the Chelsea barracks. Joseph Maslin, William Earl and James Lane were accused of pinching 47 pairs of boots, 10 pairs of gloves and ‘other articles’, all valued at £46 11s (or around £3,000 at today’s prices). All three men had previously unblemished service records and wore ribbons that indicated they had earned the Egypt medal for their efforts in the recent conflict with insurgents opposed to the British backed Khedive, Twefik Pasha (pictured right). 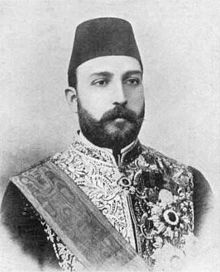 All three were remanded and sent for trial at the Old Bailey. There, on 28 May 1883 Earl was acquitted of all charges, Maslin was convicted of theft and Law of receiving stolen goods. Their previous good conduct and military service went in their favour as the jury recommended leniency: Law was sent to gaol for four months, and his partner Maslin for six, both were ordered to do hard labour whilst in prison.  Presumably both men were also dishonorably discharged from the army and the stores, which was described as being run in a ‘lax way’ by the judge at the Central Criminal court, underwent a reorganization.

If you enjoy this blog series you might be interested in Drew’s jointly authored study of the Whitechapel (or ‘Jack the Ripper’) murders which is published by Amberley Books on 15 June this year. You can find details here:

1888 was an horrendous year for the people of London, especially the denizens of Whitechapel and Spitalfields. From August to November there had been at least six unsolved murders and the whole of that area of East London remained caught under the ‘spell of terror’ the killer known only as ‘Jack the Ripper’ had cast. The police patrols had been wound down and most of the world’s press had lost interest by the end of year but the district would forever be associated with the case.

The role of the press reporting of the metropolitan police courts was partly to inform, to warn and highlight, but also to entertain. On New Year’s eve 1888 (after such a dreadful five months) the first story readers were presented with fell firmly into the last category.

An unnamed married ‘middle-aged’ woman presented herself at Westminster Police Court and asked for Mr Partridge’s help in solving a domestic issues. She had wed an old soldier – an army pensioner infant – just before Christmas but was regretting her decision to do so. Just like so many of us at Christmas (judging by the crowds filling the exchange queues at the shops on the 26 December) she had got something she no longer wanted.

She asked the magistrate if he would help her get back the furniture she had brought into the marriage, having left her new husband a few days ago.

‘And you have only been married a fortnight?’ Mr Partridge asked her.

‘Yes. He has not turned out what I expected. I can’t do with him at all’, she replied (prompting peals of laughter in the courtroom).

‘But you have not given him much of a trial’, protested the magistrate.

‘It’s long enough. What he said on Boxing Day was quite sufficient. He’s getting on in years, and I’m afraid the end of it might be that I should actually have to keep him’.

She was happy for him to go ‘where he likes’ she just wanted her possessions back. Mr Partridge was in no mood to assist however, he told her go home and try and patch things up. ‘I don’t wish to’, she replied. Then she would have to go to the County Court he explained, he could not do anything for her.

As the disgruntled wife and a younger women (her daughter it transpired) withdrew and elderly man shuffled forward to present himself, wearing ‘a cast-off military overcast’. This was the woman’s husband and he too had come to ask for Mr Partridge’s help.

He was a widower with three three children and had married the lady in question, presumably hoping for some comfort and support in his final years. She had one daughter of her own and it seemed a reasonable match. It very quickly became clear however that it was a mistake.

The Boxing Day squabble arose, he explained, ‘over a spoon’.

‘One of my children asked for a spoon [a teaspoon to be precise] to eat his dinner, and my wife said to me: “Do you want one too?”.’ At this the public gallery collapsed into ‘loud laughter’.

The old soldier tried to carry on with his narrative.

“Father is not a child”, his son replied. ‘She took offence at that, and began to storm away at a fine rate, so that I said I should have to hit her. But I did not’.

This statement prompted the woman to walk back towards the dock and challenge her husband’s version of events.

‘He’s a wicked man, your worship, and don’t you believe him. The fact is, he said he would blind me; he called me a cow, and I am not used to it. I am not, indeed; and if I had not had my daughter with me I am sure I should have  had a pair of black eyes’.

The army pensioner carried on. He told Mr Partridge that his wife had left him on Boxing Day and he’d tried to persuade her to come home and try again, but she’d refused. He had pawned his medals to pay for the wedding ring and had ‘done his best for her’. If she wanted the furniture back then she was welcome to it; he ‘did not want any unpleasantness’. He just wanted a quite life and so must also have regretted marrying in haste. Mr Partridge again admonished them to reconcile their differences and leave his court in peace. There was nothing he could do for either of them.

It was a non-story in terms of the usual domestic abuse tales the papers reported. No one had been hurt or robbed, or even deeply traumatised. But it was an amusing cautionary tale for the reading public to consume over their toast and marmalade and a fairly mundane and gentle  one to finish a year that had been anything but.