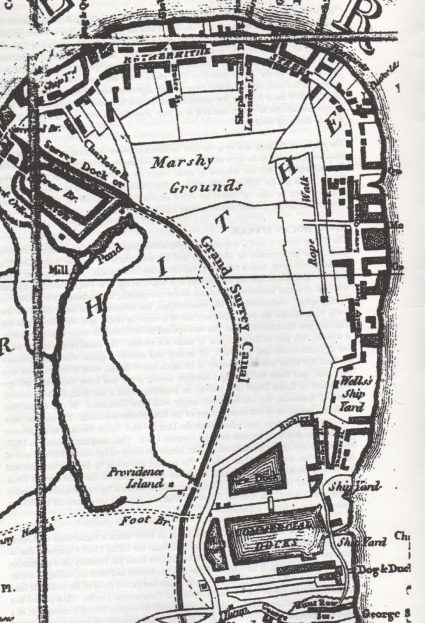 William Whitlock was a brave man and a humanitarian; someone who was prepared to risk his own life to save others. While we should always be sensible about wading in to disputes or rushing into burning houses to rescue people I would hope our society still has people like William in it. Sadly, if the reports from some of the emergency services are to be believed, we have become a society that would rather record an accident or calamity on our mobile phones than take an active role in helping out.

William lived at 1 Canal Row, Albany Road close by the banks of the Surrey Canal. The canal was built in the early nineteenth century to transport cargo to the Surrey Commercial Docks and its long towpath provided opportunities for recreation and for those with darker intentions.

On the evening  of Tuesday 20 August 1844 William was walking along the canal, as he often did, when he heard raised voices ahead. Two young people, a man  and a woman, were arguing. The woman saw him and ran over.

‘For God’s sake, Sir’, he pleaded, ‘use your endeavours to prevent that young man [indicating the other person] from destroying himself, for he has threatened to drown himself’.

William spoke to the man and advised him to go home. The other, whose name was Edward Hornblow, was clearly distressed and perhaps a little under the influence of alcohol, at first seemed to agree and started to walk away. Then suddenly he turned and ran headlong towards the canal, leaping into the water.

At that point the canal was about 8-9 feet deep and Edward disappeared into the depths. William stripped off his jacket and dived in after him. He was a strong swimmer and he needed to be because as he surfaced the young man grabbed hold of him, suddenly desperate to live. At first the pair sunk like a stone but when they came back up gasping for air, William managed to drag himself and Edward to the canal bank. By then the woman had got into the water where it was shallower and together she and Mr Whitlock struggled but got Edward to safety.

Edward Hornblow was in a sorry state and he was carried, insensible, to the parish workhouse to be treated. The young woman, whose name was kept out of the subsequent newspaper report, was also badly affected by the experience. She suffered ‘violent fits afterwards’.

Two days later William was in court at Union Hall to testify to Edward Hornblow’s attempted suicide. Hornblow had recovered sufficiently but the woman was not in court. William Whitlock said that he had rescued a number of people from the canal and the magistrate asked him if he had ever had a reward for it.   The Humane Society was formed to help prevent suicide and it often gave monetary rewards to those that saved lives. No, William told Mr Cottingham, he had never been rewarded for his actions even though on the previous occasion that he’d leapt into the canal (to save a young woman) he’d had to remain in his wet clothes for hours, and had a caught a chill as a result.

Mr Cottingham now turned his attention to the defendant and asked him why he’d taken the action he had. It was a fairly typical story of unrequited love. William had been ‘paying his attentions’ to the young woman in question and was trying to move their relationship on by discussing marriage. She wasn’t ready or she wasn’t interested. Either way, having taken some ‘Dutch courage’ before he popped the question the young man was sufficiently traumatized by the rejection to attempt his own life. He was sorry for what he’d done and promised not to repeat his actions in future.

The magistrate ended by praising William Whitlock’s heroics and ordered that Edward Hornblow provide financial sureties against any repeat of his behaviour. He would be locked up until these were secured. This case is a reminder that suicide (and its attempt) was fairly common in the 1800s with canal and the Thames being regular scenes of these human tragedies. In many cases the thing that stopped attempts from being successful was the quick and brave actions of passersby, the ‘have a go heroes’ of the nineteenth century. I do hope we haven’t entirely lost that spirit in our modern ‘me first’ society.