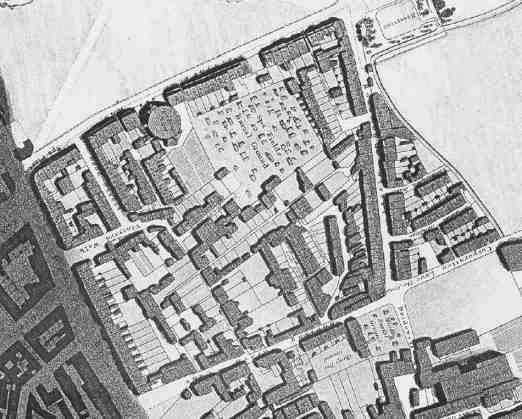 Clerkenwell Police court was crowded on the morning of the 25 February 1845 and the magistrate must have quickly realized that local passions were running high. Most of those present either lived or worked in the near vicinity of Exmouth Street, close by the Spa Fields burial ground.

Burials no longer take place in Spa Fields and nowadays the gardens are an inner-city paradise on summer days as visitors eat their lunch, walk their dogs, or sunbathe on the grass. The London Metropolitan Archives is nearby and in Exmouth Market gourmands can enjoy a wide variety of food from the stalls and cafés that trade there.

The crowd in Mr Combe’s courtroom were represented by a pawnbroker and silversmith called Watts. He stepped forward to explain that he and his fellow ratepayers were there to seek an end to ‘practices of an abominable nature’ that had been taken place in the graveyard.

What exactly were these ‘abominable practices’?

The magistrate listened as  Mr Watts told him that while the burial ground was less than two acres in size and was estimated to be able to hold 3,000 bodies. In reality however, in the 50 years of its existence on average some 1,500 internments were taking place annually. In sum then, something like 75,000 people had been buried in a space for 3,000 and more and more burials were taking place, indeed there had recently been 36 in one day the pawnbroker said.

However, while the graveyard was crowded and this would have meant digging into extant graves and disturbing them, ‘not a bone was seen on the surface’. He (Mr Watts) would provide his Worship with evidence that the bodies of interned persons were routinely being dug up and burned to make room for fresh burials. Moreover many of those coffins removed were new, the wood ‘was fresh’ he added, and witnesses had seen human body parts hacked off by diggers.

The desecration of graves was one thing but the root of the complaint was actually the effect that this practice had on local people and their businesses. According to Watts:

‘The stench proceeding from what was called the “bone-house” in the graveyard was so intolerable that many of the residents in Exmouth–street, which abutted on the place, had been obliged to leave it altogether’.

Surely, the magistrate asked him, a prosecution could be brought against the parochial authorities that had responsibility for the place? Mr Watts said that the parish of St James’ was well aware of what was happening but were doing nothing to stop it.

‘The custom is’ he explained, ‘to disinter the bodies after they have been three or four days buried, chop them up, and burn them in this bone-house’.

Then he should certainly bring a charge against them Mr Combe advised. The clerk to the local Board of Poor Law Guardians was less sure however; since the burial ground was not subject to rates he didn’t think the parochial authorities could be held liable for it. The magistrate said that if the Guardians couldn’t interfere the matter should go to the Poor Law Commissioners and, if they didn’t not help, he would apply directly to the Homes Secretary (who, in February 1845, was Sir James Graham – a politician who, by his own admission, is only remembered by history as ‘the man who opened the letters of the Italians’ in the Mazzini case).

Police Inspector Penny (G Division) testified that he had visited the bone house after being presented with a petition signed by 150 locals.

He found ‘a large quantity of coffins, broken up and some of them burning…the smell was shocking, intolerable. There were coffins of every size there, children’s and men’s’.

The court heard from Reuben Room, a former gravedigger who’d left two year’s previously after ‘a dispute’. He said he’d often been asked to disinter bodies after a couple of days to make room for fresh burials. John Walters, who kept the Clerkenwell fire engine, gave evidence that he had twice had to attend fires at the bone house. He had found it hard to gain admission (suggesting that the authorities there were not keen for people to see what was going on inside) but when he had he’d seen ‘as many coffins as three men could convey, and a great deal of pitch was fastened to the chimney’ [i.e. blackening it], resulting from the burning of coffins.

The smell, he agreed, was ‘horrible, and seemed as if from burnt bones or flesh’. A large crowd had gathered that night and were ready to pull the place to the ground.

More witnesses came forward to testify to the horror of the bone house and the ‘abominable practices’ carried out there. Catherine Murphy, who lived in a house which overlooked the graveyard had seen grave diggers chop up a body with their shovels, and had intervened to admonish them when one of the men had lifted the ‘upper part of a corpse by the hair of the head’.

Mr Combe  again advised Mr Watts and his fellow petitioners to make a full statement of their complaint to the board of guardians so that they could take action against whomsoever was to blame. Satisfied with this, the crowd emptied out of the courtroom.

Even by early 1800s the pressure on London’s graveyards was acute. The small parish burial grounds simply were not designed to cope with the huge numbers of burials that a rapidly growing population required. The local authorities recognised that larger cemeteries needed to be laid out so that room could be found for new internments. In 1824 a campaign began to build large municipal cemeteries on the edge of London, away from crowded housing and the danger of disease.

From 1837 to 1841 Parliament agreed to ‘the building of seven commercial cemeteries’ at Kensal Green, West Norwood, Highgate, Nunhead, Abney Park, Brompton and Tower Hamlets. By mid century (not long after the horror of Spa Fields) these were already filling up.* Acts in the 1850s caused most of the old seventeenth century burial grounds to be formally closed, some of these are now public gardens.

So the next time you take a stroll in Spa Fields enjoying your lunch or coffee, and taking in the antics of the local canines, you might try to imagine what this place smelled like when the bone house’s fires were in full operation.

for other posts about the problems of London’s dead see:

Knocked down in the street a week before her wedding.

A grave legal dispute in Essex