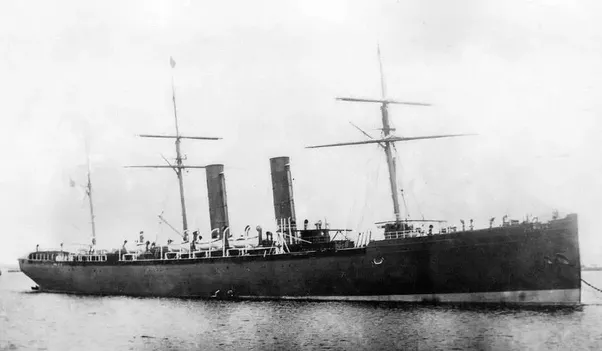 For many people arriving in London in the 1880s the capital was a stopover en route to somewhere else; for many European Jews that ‘somewhere else’ was the golden medina, the United States of America. This had been the case for thousands of Irish migrants in the 1840s, fleeing famine and poverty after potato blight devastated their lives. Very many settled in London, Liverpool and Birmingham but plenty had the ambition to make a fresh start outside of the British Empire, an empire that had palpably failed to support them when they needed it.

London’s docks must have heaved with people looking for a passage across the Atlantic in the 1800s and a similar scene would have played out at Liverpool. Men like Messers, Koosch and Schack, two German travellers, asked around to find a berth on a steamer bound for Ellis Island. These two had struck lucky and secured a place on the Etna which had been built and launched in Greenock in August 1854.

However their luck was soon to run out when they were taken in by a fairly straightforward conman. John Louis befriend the pair and explained that he was a provisons dealer and was also travelling on the Etna. They had plenty of English money but no American dollars. That was no problem, Louis assured them, he was in an ideal position to change the money for them so they’d welcomed on to US soil with open arms.

Delighted, the two friends handed over all their money (about £10)  and arranged to meet Louis the following day. Of course he never showed up and they soon realised they’d been scammed and  robbed.

With the help of the local police Koosch and Schack traced Louis and he was arrested and brought before the Lord Mayor at Mansion House Police court. He was represented by a solicitor and he promised to return every penny that his client had taken. This must have been a relief for the two Germans whose chances of making a new life in America would have been devastated before they’d even arrived had they been force to travel with nothing.

But for the Lord Mayor this wasn’t enough; he needed to demonstrate to the public that anyone behaving in such a ‘villainous and disgraceful way’ could expect no mercy in his court. He sent Louis to prison for four months with hard labour.

In the mid 1870s America was still recovering from the horrors of its civil war. Its president was the victorious Union general, Ulyssess S. Grant, serving his second term after an election which the Democrats did not field their own candidate. It was less than century, of course, from the War of Independence but America now enjoyed fairly good relations with its former colonial master, Great Britain. The two countries even had an extradition agreement after 1870, which allowed the USA to request the return of suspected offenders against US law so long as it could provide prima facie evidence of the person’s alleged guilt.

Which is why, in April 1875, the Bow Street Police Court was visited by a celebrated New York private detective, James Mooney, who was on the trail of a gang involved in smuggling contraband goods through US customs.

In 1872 Mooney and sheriff John Boland had set up a detective agency at 176 Broadway, New York, with the specific purpose of investigating business fraud. In 1874 they were hired by some prominent NYC merchants to look into falling silk prices that they suspected were being caused by an influx of cheap, untaxed materials on the US market.* Over the next few years they chased down smuggling operations all over the US, Canada, Europe and Britain.

In April 1875 Mooney appeared at Bow Street with a request to extradite Charles Lewis Lawrence. The case had  been delayed several times while evidence was being prepared but when it finally came before Sir Thomas Henry the charge laid was that Lawrence had used forged bonds to ‘pass goods through the customs at much lower duty than ought to have been imposed’.

In practice what thus meant was that Lawrence had set up a dummy company, Blanding & Co., and created fake labels for boxes of silk. The silk was labelled as cotton which drew a much lower duty ($18,000 lower in fact) than silk. One or two boxes containing cotton were then sent through customs for examination and the rest were waived through, allowing the American marked to be swamped with cheap silk. The whole operation anted to a fraud valued at ‘upwards of half a million dollars’.

Mooney, an Irishman who, like so many had emigrated to New York as a young man in search of a new life, was able to bring a number of witnesses to court to support his application. Frederick Brooks,  a US customs clerk, confirmed that there was no such firm as Blandings and a London-based handwriting expert, Mr Netherclift, testified that the forged bonds were indeed written by Lawerence.

The private detective explained that he had tracked 10 cases of ‘so-called cotton’ that had arrived in New York on the Pomerania merchant vessel. A customs officer named Des Anges had assigned just one of them for inspection. This one contained cotton, the others silk. Mooney found the crates in a  warehouse and seized them, arresting Des Anges in the process.

Lawrence had been caught on a ship leaving Dublin bound for London from America and the detective sergeant, Edward Shore, that took him into custody found a damning piece of evidence on his person. This was a note from Des Anges which read:

‘All is up. I am followed, and you are followed. Export all you can, and leave me to save myself’.

None of the evidence presented in court was challenged by Lawrence’s lawyer, Mr Lewis, but when the prosecution had finished its presentation he rose and addressed the magistrate. He explained that while he had not chosen to cross-examine the witnesses this was not because his client accepted the ‘facts’, merely that ‘the question of guilty or not guilty was not to be decided by this court’. All that the Bow Street court had to decide was whether he should be extradited.

Sir Thomas was satisfied that a prima facie [lit. “on the face of it”] case had been established; there was sufficient cause to send Lawrence for trial so he granted the extradition request. However, he added that in accordance with British law the American would be committed to a house of detention for 14 days. Lawrence ‘asked to be sent back at once’ (presumably not keen on experiencing any more British hospitality) but the magistrate refused.

Mooney & Boland were one of several US detective agencies, the most famous of which of course was Alan Pinkerton’s which still exists (if in a  slightly different capacity). James Mooney died in March 1892 at the age of 44. He moved his NYC office to Chicago where he was involved in a number of very successful investigations of business related fraud. The firm continued to operate well into the next century from its Chicago offices.