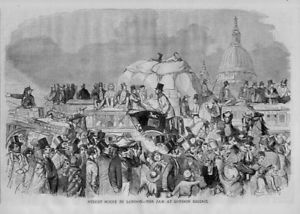 Fanny Corzinski had just left home with her husband to go to a wedding. She was dressed in her best outfit and was wearing gold earrings for the occasions. They hailed a cab and had just sat inside when a large crowd of boys and young men appeared, and proceeded to ‘mob’ the hansom.

One of the youth reached through the cab’s window and struck at them, hitting Mr Corzinski on the head with a walking cane. He hurriedly pulled up the window and urged the driver to move. The cab was going nowhere however, stranded as it was in the crowd of riotous lads.

Another lad smashed the window with a stick and tried to grab at Corzinski’s watch and chain. When he failed in this attempt he noticed Fanny’s earrings and lunged for them, pulling one off and getting away. In doing so he tore the lobe of her ear, injuring her.

Her husband wanted to run after the lad but it was simply too dangerous. Fortunately the crowd soon dispersed and the river was able to effect an escape from the danger. In the days following the robbery Fanny had noticed the main culprit and pointed him out to police. The lad was identified as Patrick O’Leary and he was picked up by PC Bolton and brought before Mr Hosack at Worship Street Police court.

The prisoner had no defense for his action and admitted his guilt, hoping for a more lenient sentence. Mr Hosack told him it was a ‘most daring and painful’ robbery and sent him to prison for three months with hard labour. 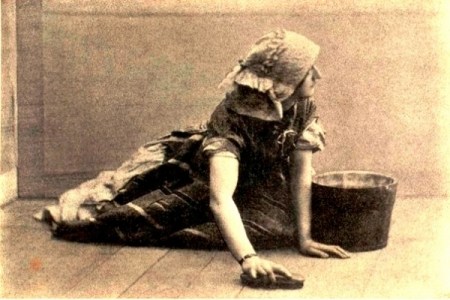 Theft by domestic servants was a common enough occurrence in the nineteenth or indeed any century. There were constant complaints about staff who pilfered, prompting one eighteenth-century commentator to quip that the servants of the wealthy ‘beggared them by inches’.

Two realities are clear of course: that servants were daily presented with an array of temptations and that this was compounded by the fact that they were paid very little.  So it is hardly surprising that some, like young Ann Scully, succumbed to these temptations.

Ann was probably a teenager. She came from a ‘respectable’ working class family in Poland Street, Soho. She was employed by Mr. and Mrs Cook in their home at 18 Berwick Street nearby. On her days off Ann liked nothing better than a trip to the theatre or a concert to hear the latest sounds or laugh at a play. Perhaps she went with a friend or even a sweetheart. In early February she was going to a concert and wanted something new to wear.

She had her eyes on a bonnet that would set off her look, decked out with the latest ‘trimmings’ that would be sure to catch the attention of any young man worth his salt. Sadly she was short of money, her wages not sufficient for such luxuries. She knew her mistress kept some earrings in a salt cellar in the parlour and figuring she can’t have placed much store by them if she didn’t wear them Ann decided to pinch and try and sell them.

She took the earrings to a jewelers shop in Prince’s Street near Leicester Square. The owner, a Mr Borley, told her they weren’t worth much but gave her a few shillings and sent her on her way. Recognizing that the cases were better than the stones that they carried he had the latter removed, replacing them with other ones from his stocks.

Some hours later however Elizabeth Cook noticed that her earrings were missing and she questioned Ann. At first the girl denied it but she eventually caved in and confessed. The servant girl then led her mistress to Borley’s shop to try and retrieve the items. The jeweler flatly denied ever buying the earrings, even trying to persuade Ann (who insisted this was the place and the man) that she was mistaken. After some persistence however he produced the jewelry but only one of the stones that they had originally housed, one remained missing.

Mrs Cook might have left the whole affair there. She had the earrings and a confession from Ann and the girl had only recently joined her service. A reprimand was the likely punishment and perhaps Ann would be expected to forfeit some of her wages to pay for the missing stone. But Mr Cook was  not so inclined. He had ‘suffered through this sort of conduct’ before and ‘no one knew so well where the shoe pinched as those who wore it’.

So the case went before a magistrate, Mr Beadon at Marlborough Street. Mr Borley was called and PC Turner (77C) represented the police. The justice directed most of his ire at the jeweler who he held responsible for not asking more questions and for trying to pretend he’d never seen Ann before. One of the stones remained unaccounted for and the tradesman had ‘better lose no time in finding’ it he insisted.

As for Ann he was minded to be lenient given her youth and the respectability of her parents. So hoping she had learned her lesson he would not send her to prison for a ‘the long period he might do, but [just] for 14 days’. Given that this probably meant that she would be dismissed as well it was a heavy penalty for the young girl, who would now most likely have to return to her parents’ care in Poland Street and hope that work, or marriage, would be found for her. It was a heavy price to pay for a ‘jolly new bonnet’ and a statutory lesson for any young domestic that might be reading the papers that day.