In July 1888 Robert Allen, a 64 year-old cabinetmaker, was charged at Bow Street, with ‘resisting the police and riotous conduct’. He’d been arrested in Trafalgar Square amid what seemed to have been a rather unusual form of demonstration.

Demonstrations in Trafalgar Square were all the rage in the 1880s. In 1886 a public meeting had ended in chaos as a ‘mob’ had moved off to smash up property in nearby Pall Mall. Then in 1887 the heavy-handed response of the authorities to a peaceful protest had left at least one person dead and very many more injured in what was dubbed ‘Bloody Sunday’ by the press.

Not surprisingly then by July 1888 the police were a little jumpy about protestors and speakers in the square. In fact unauthorized gatherings were banned and no one was supposed to set themselves up to address crowds in the square. If they wanted to do that they had only to move along to Speakers Corner (close to Marble Arch on Hyde Park) where it was permitted.

At four o’clock in the afternoon of the 21 July 1888 (a Saturday) Allen was walking around the square ‘speaking in a loud voice’. What he was saying we don’t know but it had drawn a large crowd to him, and they were following the orator on his ‘perambulation’.

Superintendent Sheppard (of B Division, Metropolitan Police) was on duty in the square that day and was alarmed by what he saw. This seemed like a clear breach of the laws governing assemblies and he tried to intervene. Around a thousand men and boys were now listening to Allen and there was, Sheppard later told the Bow Street magistrate, ‘a good deal of horse play’.

‘Meetings are prohibited’, he explained to Allen, ‘and I cannot allow you to have a crowd following you causing danger and obstruction. I must disperse them’.

‘I am only having a conversation with my friend’, replied Allen, pointing at someone in the crowd nearby.

‘That is sheer nonsense’ the policeman told him. If he wanted to continue to talk to his friend he’d clear a gap in the throng and the two could leave peacefully. But Allen didn’t want to do that.

Sheppard called over some officers who went to disperse the gathered crowd and Allen walked away. However, far fro stopping what he was doing he just continued on a new circulation of Nelson’s Column, drawing a fresh group of followers. Now they were singing the Marseillaise and Sheppard described them as ‘very rough’. Again he tried to have them broken up, again Allen created a disturbance by speaking loudly to no one in particular.

The superintendent had run out of patience and told Allen that he had been warned but now he would be arrested, by force if necessary. The cabinetmaker went quietly, followed by a large crowd all the way to the police station.

In court Allen denied holding a meeting, rejected any accusation that he was a troublemaker, and said while some of the police had always acted reasonably, others ‘gloried in brutality’.  His politics were clear, however, when he declared that ‘a society of millionaires and paupers could not be formed on a sound basis’. He was about to launch into a political speech at this point but Mr Bridge (the magistrate) cut him off. Allen was bailed while further enquiries were conducted.  A week later Allen was discharge after promising not to disturb the public peace in the future.

I recently watched Ben Zand’s insightful documentary about the Extinction Rebellion movement and it occupation of central London this year. The co-founder of ER – Roger Hallam – described their tactics as “Criminal inaction.” If you witnessed it live on the news you’ll be aware that thousands of protestors of all ages staged a series of peaceful sit down occupations of London landmarks. They brought traffic to a standstill in the capital for an unprecedented 11 days but no one was hurt (although it cost the public and authorities millions of pounds in lost business and policing). 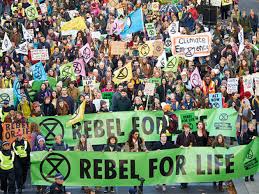 It was ‘remarkably effective’ as Zand agreed, it made the government listen and Climate Change is now firmly on the agenda. It galvanized tens of thousands of people, many of them young people who weren’t involved in politics or protest before but now are. At one point in the April take over the head of the Metropolitan Police – Cressida Dick – is seen imploring the protestors to go  home or go to Marble Arch (where they can protest legally), warning that otherwise they will be arrested.

But arrest was one of their tactics. By being arrested and charged they get publicity, a day in court, and their cause is highlighted. They are non-violent, they are creative, determined, and they are not going away. They are also part of a well-established tradition of protest in this country (not all of it peaceful of course) that stretches back hundreds of years. I met some of them in London and then later this summer in Edinburgh. These are intelligent, passionate, and well organized people and while they provide a temporary headache for the likes of Cressida Dick and Superintendent Sheppard we should be very proud that our nation continues to produce young people who are prepared to put their lives and liberty on the line to achieve a better future for all of us.

Drew’s new book (co-authored by Andy Wise) is published by Amberley Books. It is a new study of the Whitechapel murders of 1888 which offers up a new suspect, links the ‘Jack the Ripper’ killings to the unsolved ‘Thames Torso’ crimes, and provides the reader with important contextual history of 1880s London. The book is available on Amazon here