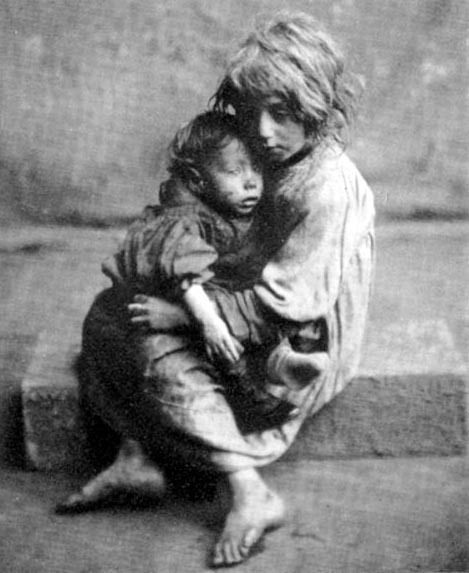 The fact that Alice and Rosina Purcell were charged at Worship Street Police court under legislation intended to prosecute beggars and vagrants is not, in itself, unusual in the 1870s. Policemen, officers of Mendicity Society, and other public servants were all obliged to point out and have arrested those who wandered the streets destitute and begged for alms.

No, what makes this case so upsetting is the fact that that Alice and Rosina were aged just 6 and 8 respectfully. They were found wandering around Spitalfields Market begging ‘and picking up rotten fruit from the ground’. They were dressed in ‘the dirtiest of rags’ when James Gear, a school board inspector, decided to intervene. He took them to the nearest police station and then brought them before Mr Hannay at the east London police magistrate’s court.

The pair were clearly poor and hungry but through the filth the reporter still described them as ‘cheerful and intelligent’. They told the justice that their mother was dead and their father, who worked as a dock labourer, ‘left nothing for them at home’. They had no choice but to try and beg or find food for themselves.

This is a good example of the reality of life for very many people – young and old – in late Victorian Britain. Without a welfare system that supported families effectively girls like Alice and Rosina had to literally fend for themselves. We can criticize and condemn their father but with no wife at home to care for his children he was obliged to go out to work all day. Moreover dock work was not guaranteed – he’d be expected to be there very early in the morning for the ‘call on’ and such seasonal work that he would have got was very badly paid.

Mr Hannay was told that the girls were protestants and it was hoped that they might be sent away to the Protestant School. That would provided a solution of sorts but sadly there were no places available. Instead the magistrate ordered that the little sisters be taken to the workhouse until a better option could be found.

We might congratulate ourselves on having left such poverty behind. Children as young as Alice and Rosina should not have to beg for food in the modern capital of Great Britain. After all we are one of the richest countries in the world and have a well established welfare system that, we are told, people travel to the UK from all over the planet to exploit.

Yet poverty still exists in Britain and to a much higher rate than any of us should be comfortable with.  In March it was revealed that 4,000,000 children live in poverty in the UK, an increase of 500,000 since 2012. Last night’s news detailed the impact this is having in schools where almost half of all teachers surveyed said they had given children food or money out of their own pockets such is the degree of want they experience among pupils. The news report stated:

‘Children reaching in bins for food, homes infested with rats, five-year-olds with mouths full of rotten teeth. The reality of poverty in Britain, according to teachers who say they’re having to deal with it every day’.

This is not that far removed from the case above, the key difference being we no longer prosecute children for vagrancy or separate families in the workhouse. But it is absolutely scandalous that in a country that can waste £33,000,000 on ‘botched no-deal ferry contracts’ or spends £82,000,000 annually on the Royal family, and allows directors of FTSE companies to earn (on average) £2,433,000 each year (without bonuses) any child is going without sufficient food.

If you enjoy this blog series you might be interested in Drew’s jointly authored study of the Whitechapel (or ‘Jack the Ripper’) murders which is published by Amberley Books on June 15th this year. You can find details here.