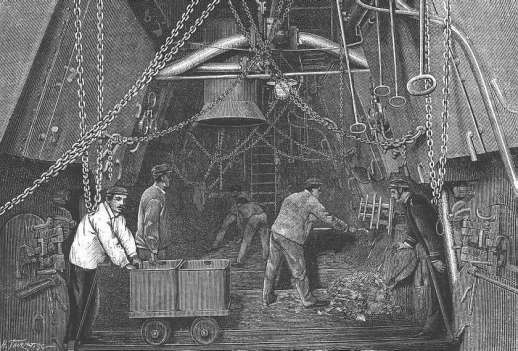 In the boiler room of a Victorian steam ship

On Wednesday I featured the story of Henry Harcourt who had claimed he was deaf and dumb and presented himself at the Lambeth workhouse casual ward seeking shelter. There he suddenly blurted out that he could in fact speak (and hear) but had closed off the world while serving as a stoker on a voyage to and from Australia. To the surprise of everyone in the Lambeth Police court he also claimed to be a relation the sitting Home Secretary, Sir Vernon Harcourt.

Henry was remanded in custody so that enquiries could be made into his history to ascertain whether he was telling the truth or not. Two days later the papers reported that he was back up before Mr Chance at Lambeth for the latest developments to be revealed.

Police constable 110L took the stand to tell Mr Chance that he’d discovered that Harcourt had been a barman then, working with his aunt, and she didn’t remember him having any difficulties speaking or hearing then. That was in 1877 he confirmed, just six years earlier.

The magistrate now turned to Harcourt in the dock to ask him to explain his situation.

‘Do you seriously say now that you have pretended to be deaf and dumb for 14 years?

‘Yes, to all but my immediate friends’, replied the former stoker/barman.

So how did he manage on board the ship, Mr Chance wanted to know.

‘I only spoke to those attending the fires. The persons on board thought I was deaf and dumb’.

‘I am very sorry for what I have done’ Harcourt added.

The court heard that he had written down requests for food on pieces of paper so as to maintain his ruse with his fellow shipmates but could offer no real explanation for why he acted this way. Mr Chance was clearly dissatisfied with his answer and equally determined to get to the bottom of it. Was there anyone who could shed any light on the case, he asked?

The police constable that had investigated Harcourt’s background said the aunt was loathe to come forward to testify and added that she was a woman of independent means. There was a declaration from Harcourt that he was entitled to some family money from a will but nothing was at all clear. Mr Chance said he needed to hear directly from Harcourt’s aunt and remanded him in custody once more.

‘It’s a most extraordinary thing’, the magistrate concluded, ‘and I cannot help thinking there is something more than has already come to light’.

Whether there was, and whether it was reported, you will have to wait to find out later this week.