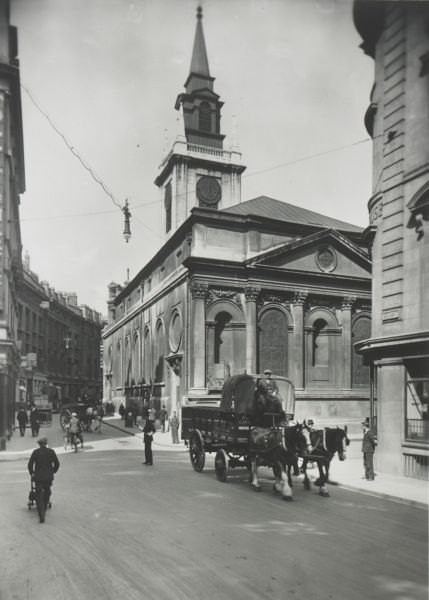 The church of St Lawrence Jewry in the 1930s

William Dell was having a bad day and it was about to get worse.

In the first week of June 1869 he had been presented with a summons to attend at the Guildhall Police court. Being summonsed was one of the ways you ended up before a magistrate in nineteenth-century London, and was certainly preferable to being brought there from a cell by a policeman or gaoler, but was still unpleasant and embarrassing.

Dell’s ‘crime’ was that he was behind with his child support payments, or, as the Victorians would have termed it, he was in ‘bastardy arrears’. Having impregnated Emma Barrett but not being inclined to marry her, he had left her and her baby ‘chargeable to the parish’.

In other words, without the financial support of William Dell Emma would have been forced to exist on money raised from amongst the local ratepayers. Where possible, and when a father could be identified, the overseers of the poor much preferred to avoid this. If Dell wouldn’t marry Emma he could at least be expected to stump up the money to support her bastard. The amount was at 2s 6d a week.

Dell either thought he should pay or didn’t have the spare cash to do so, so he ignored the bastardy order that had been imposed on him and had ran up arrears of £2 5s by the beginning of June (suggesting that he had paid nothing for about 18 weeks).

Hence the court summons in June.

He was stood outside the Guildhall court waiting to be called in when a woman approached him. She was Sophia Barrett, Emma’s mother. She berated William for ruining her daughter and abandoning his child and, when Dell protested that the child was not his but his brother’s, she lost her temper completely.

Sophia started to hit Dell with the only weapon she had to hand, her umbrella. He tried to fend her off and then ran away to the rear of St Lawrence Jewry church (which stands in Guildhall Yard) to escape her.

Sophia Barrett was not so easily shaken off, and went round the church the opposite way and attacked him again in Gresham Street. Here she ‘pulled his hair and struck him’ again and again until William Dell was rescued by a passing policeman. Sophia Barrett was now arrested and both parties appeared in the Guildhall Police court together.

Sophia Barrett was charged with assault but showed no remorse. Indeed she went on the attack complaining to the alderman magistrate that Dell had neglected his obligations and left her, a poor widow,  to care for both her daughter and the child. Dell, she said, had ‘never contributed one farthing to the support of the child and had declared that he would not’.  She felt entirely justified in letting the man know exactly how she felt.

Alderman Finnis seemed to largely agree with her. He sympathized with her and dismissed the assault charge on the grounds of provocation. As she stepped down from the dock, her reputation enhanced rather than tarnished, Dell took her place.

Alderman Finnis asked him why he had failed to obey the order of the court to support Emma Barrett and her baby? Dell wriggled in the dock and claimed he had no money to do so. The money ‘he earned’, he stated, ‘was barely sufficient for himself’. It was a lame excuse even if for many in Victorian London barely subsistence wages were the norm. He had ‘had is way’ with Emma and was obliged to face the consequences.

In the alderman’s eyes if he allowed Dell to avoid his responsibilities he would be exposing the good ratepayers of the City to a flood of claims for child support. So he glared down at the man in the dock and told him that he could either pay his arrears now or go to prison with hard labour for two months. Dell refused to pay and so was led away to start his sentence.

It is worth noting that his incarceration did not cancel his debt, on his release he would still be expected to support Emma’s child unless she married and found someone else to pay for its upbringing. So Dell faced an uncertain future if he continued to refuse to pay. Once out of prison he was still liable and unless he found the money he might well end up being sent back to gaol. Moreover, having been inside once his chances of finding regular well-paid work were diminished. If he thought he was merely scraping by beforehand then his outlook after prison was hardly improved.

But at the same time the situation was little better for Emma; any hope that she might have had that Dell would recognize that his best interests lay in marrying her were probably killed stone dead by this prosecution and the animosity that came with it. She would also find it hard to persuade a suitor to take on another man’s bastard. So she would continue to live with her mother in a household with no male breadwinner, and few prospects of avoiding an impoverished existence.

At the heart of this was a child. A child whose father didn’t want her and who the ‘state’ (which in the 1860s meant the parish) didn’t want to have to pay for. Today Emma would be better supported, although our own society still struggles to make fathers take responsibility for the children they beget on women prefer not to marry or support.