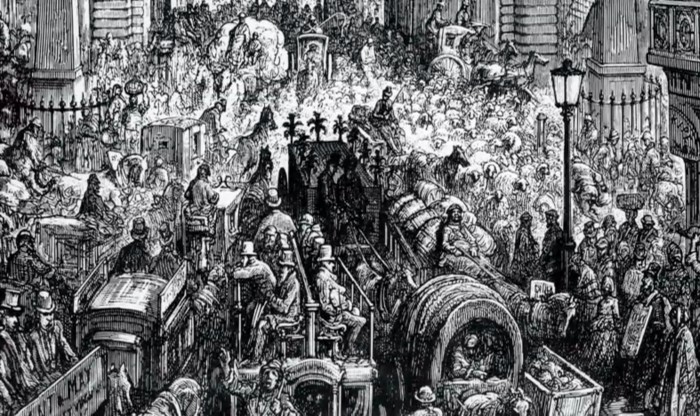 While the Metropolitan Police courts dealt with all manner of crimes, misdemeanors, and complaints, the press only selectively reported them. Sensational cases, hard rending ones, and those which reflected a current concern were the most likely to grab the ‘headlines’ in the later 1800s.

On 12 January 1881 the Morning Post chose to focus attention on dangerous driving in central London, highlighting three cases that came before the Westminster magistrate Mr Partridge. Of course none of these involved cars or vans or motorcycles; none of the vehicles we associate with road traffic accidents had been invented in the 1880s, everything was horse drawn in Victorian capital.

Yet accidents were fairly common, and being run over by a horse drawn cart or carriage was just as likely to result in injury and death as being hit by a car today. More so perhaps, since medicine was much less effective and the emergency services much less well equipped.

Speeding was termed ‘Furious driving’ – driving or riding that endangered life – and was punishable by a fine or imprisonment; cab drivers found drunk by police could be arrested, those driving ‘furiously’ would be charged accordingly. Drunk driving was clearly as much of a problem in the 1800s as it was in the 1900s.

On 11 January John Smith was charged before Mr Partridge at Westminster with being drunk in charge of his hansom cab and running over a little girl. Smith had been driving along the Fulham Road and turned quickly (too quickly really) into Marlborough Road, just as Rhoda Thompson was crossing it.

Smith’s cab hit the child who went under the wheels and was run over. A policeman saw the incident and intervened, making sure Rhoda was taken to St George’s Hospital. The cab driver appeared to be drunk and so he was escorted to the nearest police station to be charged. In court Smith said he was distressed by the accident but not drunk and said the officer must have mistaken his shock for inebriation.  The magistrate was told that the girl was still in hospital and her condition not yet known, with that in mind he remanded Smith in custody to see what happened.

Next up before him were George Franklin (21), James Galleymore (also 21) and Fredrick Drake (a labourer, whose age was not given). Franklin and Galleymore were carmen, the nineteenth-century equivalent of van delivery drivers today. Franklin had been arrested for being drunk in charge of a horse and cart and knocking down John Silcock in the King’s Road, Chelsea. Galleymore and Drake were both drunk and disorder the court was told and the former was also charged with assaulting PC Campion (506T) at Chelsea Police station.

Franklin was driving a van ‘rapidly’ as it went round the corner by the police station, just as Silcock was crossing the road. Silcock, an elderly man who was employed as a timekeeper by the London Omnibus Company, was knocked down but, fortunately, not badly hurt. He’d been carrying a small child in his arms and miraculously, she was also unharmed.

Mr Partridge, perhaps minded to make an example of the trio, said ‘he was determined to do all in his power to put down this reckless driving in the streets’. He sentenced Franklin to two months in prison with hard labour, gave Galleymore six weeks, and fined Drake 10s for being drunk (warning him he’d also go to gaol if he failed to pay).

Finally, John Lincoln was brought up to face a charge of being drunk in charge of his Hackney cab. On Monday evening Lincoln’s cab had collided with a ‘light spring van’ being driven by William Dyerson on the Vauxhall Bridge Road. Such was the force of the crash that Mrs Dyerson was thrown out of the van onto the street, breaking her arm.

A policeman saw the whole incident unfold and rushed to help the lady. Lincoln was arrested and the officer declared he was drunk and driving ‘recklessly’. Mr Partridge decided the incident was severe enough to require a jury trial and committed him to the next sessions of the peace.

Lincoln (who gave his age as 52) appeared at the quarter sessions on 24 January 1881 where he was found not guilty of furious driving but was convicted of willful misconduct, and of causing ‘bodily harm’ to Jane Dyerson. The court fined him 20s.

In the streets around me a 20mph speed limit is in place, because there are several schools near by. This doesn’t stop people driving ‘furiously’ and on the main road cars and vans frequently race across the zebra crossing, even when pedestrians are halfway across it.  They know that they are very unlikely to be caught or prosecuted for doing so, and so can speed and endanger lives with impunity.