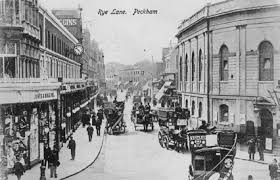 In early September 1888, just before real panic set in across London as a result of the Jack the Ripper (or Whitechapel) murders, a 14 year-old lad was brought before the Lambeth police court charged with theft and poisoning.

John Voisey accused the lad, Alfred Ellis, who was employed alongside him at  a cabinet makers in Peckham, of drugging his drink and stealing a sovereign from his pocket. He said that on the 29 August he’d entered the workshop on Victoria Road, and hanged his waistcoat in the ‘back shop’. In the pockets were three sovereigns, worth around £80 each in today’s money.

Moreover when he tasted the gin it wasn’t right, and he suspected something else had been added to it. That something, he resumed, was ‘spirits of salts’ which were used in the workshop and a bottle of which was kept in the backroom, where he’d stored his waistcoat. Spirits of salts was actually hydrochloric acid, a dangerous poison but one with a quite distinctive smell.

Fortunately Voisey hadn’t imbibed much of it but he clearly thought  Alfred was responsible and collared him. Had the boy stolen his money and tried to distract him by making him ill? This was what Mr Chance at Lambeth had to decide.

The magistrate asked for medical evidence, which was provided by a chemist named Barithwaite. He declared that the gin was indeed adulterated with spirits of slats but not to degree that would kill. It could give the victims severe stomach cramps however. More seriously even for Alfred was the fact that a police search found that he had 17s6d on his person that he couldn’t account for.

Alfred denied stealing but confessed to poisoning John Voisey’s drink. He didn’t mean any harm he said, but didn’t approve of him drinking. ‘I am teetotaler’ he declared (mindful perhaps of winning magisterial approval) ‘and don’t like to see him drink spirits’. Mr Chance said he would consider the case for a day or so and wanted a second opinion on the poisoning from the police surgeon. He remanded Alfred in custody in the meantime.

The remand was not good news for little Alf; on the 17 September 1888 he was tried at the Old Bailey and pealed guilty. The jury strongly recommended him to mercy on account of his youth and this probably saved him from further punishment. Judgment was respited by the judge and I can find no record of him ending up in prison.

It was on Saturday 8 September 1888 that Annie Chapman’s mutilated body was discovered in the rear of a property in Hanbury Street, off Brick Lane in Spitalfields. 29 Hanbury Street was home at the time to Harriet (sometimes ‘Annie’) Hardiman, who ran a cat’s meat shop from a room on the ground floor. In my recent study of the Whitechapel murders I suggest that Harriett was even more closely linked to the ‘Ripper’ murders than being living on the premises where one of the victims was found.

The book, (co-authored by Andy Wise) is published by Amberley Books. It is a new study of the Whitechapel murders of 1888 which offers up a new suspect, links the ‘Jack the Ripper’ killings to the unsolved ‘Thames Torso’ crimes, and provides the reader with important contextual history of Victorian London.

The book is available on Amazon