One of the things ‘we think we know’ about the Victorians is that they were very prudish and straight-laced, even going to the bizarre lengths of covering up their piano legs so as not to shock or titillate. This view of the age is sometimes confirmed by depictions of a sour faced Queen Victoria proclaiming: ‘we are not amused’.

The reality is that the Victorians were hardly much less lascivious and fun-loving than their Georgian predecessors. Perhaps the emphasis on family (best epitomized by Royal Family) and the work of Samuel Smiles in setting out so-called ‘Victorian values’, combined with a post war desire to look back  to the past to make comparisons with the present, have skewed our views.

Anyone strolling around London in the 1800s would have seen plenty of evidence that the Victorians liked to enjoy themselves.  This age saw the rise of the musical theatre, the novel and popular newspapers; it witnessed the invention of the railways, cheap travel and the weekend excursion. Here too was the Great Exhibition, great ceremonial pageants, and military parades. And with all of this (largely) wholesome entertainment came vice at a level the Georgians could only have imagined.

The invention of photography offered new opportunities for pornography and the increasingly economic cost of printing and distribution made the printed vice trade even more profitable. This was not lost on the ‘moral majority’; those that railed against vice and crime. London became the ‘modern Babylon’; a sink of iniquity and place where domestic missionaries sought new converts in the dark alleys of Whitechapel and Southwark. In Holywell Street, off the Strand, there was a roaring trade in indecent literature to suit every taste.

In 1841, early in the young queen’s reign, a barrister representing the Society for the Suppression of Vice appeared at the Guildhall Police court in the City to apply for a warrant against a local bookseller. St Paul’s Churchyard (close by Wren’s cathedral) had long been associated with the print trade, and with obscene publications and prostitution to boot.

Mr Clarkson, the barrister, explained that officers from the Society wanted to draw the magistrate’s attention to the fact that this bookseller (at this point unnamed) was displaying ‘five indecent little pamphlets in his window’. Under the terms of the Vagrancy Act he had tried to summons the man to court but this had been ignored, now he wanted a warrant which carried more force (since it was executed by a policeman).

The lawyer argued that the act ‘1 and 2 Victoria, c.38’ (the Vagrancy Act) declared that anyone exposing to view obscene images was liable to be dealt with as a ‘rouge and a vagabond’ and so was punishable by a fine or, if unable to pay, imprisonment. This toughened up the previous act of George IV (5 Geo. IV. c.83. 1824) and he wanted to use it.

Alderman Copeland was in the chair at Guildhall that day and Mr Clarkson handed over some of the obscene pamphlets in question. These had titles such as ‘The Wanton Widow’, ‘The Petticoat Pensioner’ and ‘Venus in the Cloister’*. 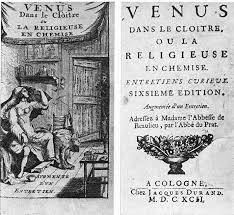 I suspect by modern standards of indecency they were pretty mild but in a society where ‘nakedness’ often meant that someone was dressed only in their undergarments, and where a glimpse of ankle was evidence of a woman’s immoral character, the alderman was suitable disgusted. He issued the warrant and the barrister rushed off to find an officer to execute it.