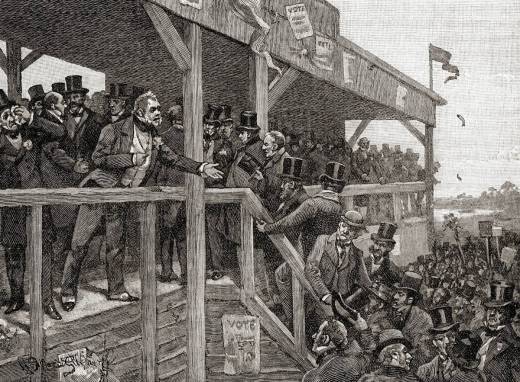 With a new prime minister about to be announced this morning thoughts turn to a possible General Election. British politics is going through a tumultuous time and it was interesting to hear the new leader of the Liberal Democrats describe the Conservatives and Labour as the ‘two old parties’ when the Liberals are just as ancient and established as the Tories. They used to be the radical party of British politics, a tag they still like to revive when it suits them (as it does today with their opposition to Brexit).

In the mid 1800s parliament was made up of Conservatives (Tories) and the Whigs; the parties that had dominated politics for a century. But within the Whigs there was a splinter of MPs who described themselves as ‘Radicals’. They were dedicated to extending the franchise to include the working classes (who were largely excluded from the vote until the 1860s) and had been agitators against the hated Corn Laws (which kept food prices high for the poorest).

At the general election in 1852 the Radicals stood candidates against the Whigs and the Tories in the two seats that served the London constituency of Middlesex.  Middlesex had been a hotbed of radical politics from at least the late 1600s. The most famous radical MP for Middlesex was probably John Wilkes, and widespread rioting accompanied his election in 1768. Wilkes was a fierce opponent of the government of the day and had to flee to Paris to avoid prosecution for libel and debt. When he returned and stood for parliament he was elected but then promptly imprisoned in the King’s Bench prison. His supporters went on the rampage. Wilkes was a populist with great appeal but deep down he was also a cynical self-serving politician who would later order troops to fire on the Gordon Rioters as he was, by then, one of the City’s magistrates.

In 1852 there were more riots in Middlesex as supporters of the Radical candidate Ralph Bernal Osborne (below right) clashed with those of John Spencer-Churchill (the Marquis of Blandford) who stood for the Tories. An effigy of the Marquis was carried through the streets along with a stuffed fox and a pole with the label ‘a Derby puppet’ attached to it. Lord Derby had become PM in February 1852 following the fall of Lord Russell’s Whig ministry. It was a minority government and it too collapsed in December that year. He is sometimes credited with creating the modern Conservative party (an honour more usually credited to Disraeli).

The riots resulted in a series of arrests and led to three men appearing before Mr Paynter at Hammersmith Police court. Thomas Hall (25) was a sweep; Edward Hewett (33) and William Cook (19) were labourers, so all were working class. After the poll had closed disturbances had erupted at Hammersmith and the police who were there to keep order were attacked. Some of the police were in plain clothes, watching the crowd, and Hall was seen parading with the stuffed fox. PC John Jones (210T) stated that he was assaulted by Hall and as he tried to arrest him a ‘mob’ closed in on him.

PC Petit (194T) went to help and was thrown to ground by Hall. The prisoner then kicked him in the face, bruising his chin. The other two defendants joined in the fracas. PC John Searle (69T) was threatened by Cook who carried a large stick, which had been used to carry a flag, but was now simply a weapon. The police had taken the men into custody after a struggle and at the station it the men had bragged that any fine they got would be paid by the candidate they’d supported, Ralph Osborne.

Gangs of ‘roughs’ were a feature of election campaigns in the period just as they had been in the eighteenth century. Intimidation was common in elections – there were no secret ballots until 1872 so everyone knew who you voted for. The magistrate established that none of the trio were voters and the police said that all of the were known ruffians who’d appeared for assault before. Perhaps they were hired by the radicals, although they would have denied this. Politics was a dirty business in the 1800s, although one wonders whether it is much better today.  Even if Osborne had agreed to pay any fines it didn’t help the men. Mr Paynter told them their behavior was ‘disgraceful’ and said they had ‘interfered with the freedom of the election’, by preventing voters for going to the hustings.  He sentenced Cook to a month in gaol and the others to three weeks each.

After sentencing Cook claimed that he been employed to cause trouble by Dr Simpson and Hall said he was bring paid by a man named Rainbow. It neither of them any good as they were all led away and to be locked up.

The election returned the two incumbent MPs, Osborne for the Radicals and Robert Grosvenor for the Whigs. John Spencer-Churchill (the grandfather of Winston) came a narrow third. He entered Parliament in 1857 when the death of his father meant that he inherited the title of the duke of Marlborough. There were only 14, 610 registered voters in Middlesex in in 1852, returning two MPs. Only about half of them turned out to vote. Now the former Middlesex seat has been broken up into 8 separate seats in London, from Uxbridge to Hornsey.

If the voting system of the 1850s seems undemocratic to modern eyes then perhaps we should note that our next Prime Minster has just been elected by a tiny handful of the electorate, roughly 180,000 people out of 47,000,000 (or less than 1%).