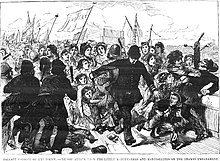 On occasion ‘bigger’ history touches the reports from the metropolitan police courts as the magistracy sought to deal with everyday issues in London. This is one of those.

Lewis Lyons appeared at Worship Street Police court in July 1888 to answer a charge that he had obstructed the highway in Fairford Row, Bow. The law of obstruction was one of the most frequently prosecuted actions at summary level since it was a misdemeanor that was usually brought by the police. They patrolled the streets and so anyone blocking the road, whether by selling from a coster’s barrow, gambling with dice, busking with an organ and monkey, or lecturing the public on politics or religion, was liable to be asked to ‘move on’ by a policeman. If they refused then they would have their name and address taken and be escorted to the nearest police station.

Lyons was addressing the crowd that had gathered there to listen, most of them young women who worked nearby. He was talking to them about their conditions of work, how they were being exploited by their employers and, presumably, urging them to resist. He was a well-known socialist agitator who counted Annie Besant amongst its circle of acquaintances. Fairford Road was the home of Bryant and May, the match manufacturers. The firm paid their workers very little and forced them to work in appalling conditions. Lyons told the gathered crowd that Bryant and May were ‘sweaters’, who ‘employed girls who had no organization at low wages, and reduced that wage by fines’.

Trouble had started in June when Annie Besant’s article on conditions in the factory had been published in The Link, a radical newspaper. The article had been informed by whistle blowers amongst the match girls and when Bryant and May reacted by sacking an employee a strike committee was organized.

Lyons was speaking on the 6 July 1888 which was the day when nearly the whole factory had downed tools and come out in solidarity to protest the conditions and poor pay they had to put up with. While Besant’s article might had helped precipitate the action she wasn’t the leader of the Match Girl’s strike. As Louise Raw has shown this was an action organized by the working-class women of Bryant and May themselves, although with support from middle class Fabians and socialists like Besant, Lyons and Charles Bradlaugh, the Northampton MP. Besant helped broker a deal with Bryant and May’s management and on 16 July the strike ended with the employers acquiescing on all of the women’s demands. Meals would be taken off the ‘shop floor’ (and so away from the noxious phosphorus that was central to the manufacturing process), unfair deductions and fines were stopped, and grievances were no longer to filtered through the male foreman on the shop floor but would go directly to management.

Lyons was unable to persuade the magistrate at Worship Street that he was not guilty of obstruction. He claimed that the crowd was caused by the police not by himself, that the crowd was already there, and that anyway the police had ensured that carts and wagons could get in and out of the factory the whole time. He had plenty of support in court, including a woman named Sarah Goslin who several of the watching match girls in court mistook for Besant, rushing over to say ‘It’s all true!’.

Mr Bushby was unmoved, perhaps unsurprisingly given the challenge to his class that the Match Girls strike represented. He fined Lyons 20s or 14 days imprisonment. I imagine he paid because he wasn’t a poor man. He later bailed out Besant when she was arrested. The strike was an inspiration for the trade union movement and the 6 July 1888 was a key point in that ongoing battle between workers and bosses, with the following year saw the successful Great Dock Strike, which also started in the East End of London.

The scenes of police grappling with protestors in Fairford Street must have shocked the reading public, especially those with property and businesses but within a few weeks a new story would dominate the newsstands of the capital. By the end of August 1888 it was clear that a brutal serial killer was stalking the streets of the East End, the killer known to history as ‘Jack the Ripper’.

Drew’s new book (co-authored by Andy Wise) . It is a new study of the Whitechapel murders of 1888 which offers up a new suspect, links the ‘Jack the Ripper’ killings to the unsolved ‘Thames Torso’ crimes, and provides the reader with important contextual history of Victorian London. The book is is published by Amberley Books and is available on Amazon