A nation divided against itself, unhappy with its political masters; tens of thousands of people marching though the capital with banners held aloft; a petition signed by thousands of ordinary people which the Prime Minster chooses to ignore. We’ve been here before haven’t we, in 1842 with Chartism. In May of that year a 100,000 people (Maybe 150,000) turned out to accompany a petition supporting the Charter on its way to Parliament. This was a ‘good-humoured and “teetotal”’ procession but later that year, and subsequently, things turned ugly as the Victorian state not only rejected the six demands of the people but deployed the police and military to guard against insurrection.1

By March 1848 Chartism was in decline but radical revolution was very much in the air in continental Europe. 1848 was the ‘year of revolutions’  and in March 1848 London witnessed large gatherings of Chartists in places with long histories of popular protest (like Clerkenwell and Bethnal Green) and a mass demonstration on Kennington Common later that spring, on 10 April. 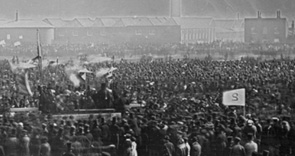 This drew another 150,000 people (right) but the authorities made sure it didn’t go anywhere: troops were stationed throughout the capital at hot spots and no one was allowed to cross the Thames to march on Parliament.

The Charter demanded the following reforms, all but one of which have been achieved today:

I doubt anyone (especially Brenda) wants to see annual general elections but in 1848 the government was not inclined to grant any of the Chartists’ demands. The 1832 Great Reform Act had extended the franchise to the middle class but the idea of making it universal was not properly contemplated until the 1860s when Disraeli took his ‘leap in the dark’ and enfranchised very many more working class men.

The 1848 petition was claimed to have 5m signatures but it reality it had fewer than 2m and some of these were faked (it was apparently signed very many times by Queen Victoria). This undermined the Chartists just as much as the violence that some Chartists deployed (in the Newport Rising of 1839 for example) hardened some hearts against them and divided the leadership.

Yesterday (23 March 2019), 171 years after 1848 something like a 1,000,000 people marched through central London and tried to squeeze into Parliament Square. There was no violence and it was all very good humoured.

The police presence on the ground was minimal (the police have other ways to watch crowds these days, evidenced by the helicopters that circled overhead and the ubiquitous CCTV). People came from all over Britain not just from ‘Remoaning’ London, and they brought their children and pets with them.

There was a carnival, pro-European, feel to the march albeit with a lot of deep felt anger and frustration at the cavalier attitude of the ruling party (and indeed the opposition in Parliament). This was a protest with a very similar purpose to that of the Chartists in that both wanted to see a shift in power from the executive to the people, and both would argue that they were not being listened to.

The petition to revoke Article 50 had passed 4.5m signatures by teatime Saturday (as most of the marchers were making their way home) and the woman that had posted it was hiding in Cyprus after receiving death threats for having the audacity to call for a democratic vote by the people. Today the government doesn’t need to send in the troops to break up demonstrations or have the secret service infiltrate political groups, there are enough trolls and anti-democratic keyboard warriors to do their dirty work for them.

Everything we have achieved as a people in terms of winning concession from our royal or our political masters has been achieved through protest and campaigning. The rich and powerful did not (and will not) give up their privileges easily but we the people are many and they are few, and ultimately they recognize this and bow to pressure when they have to.

From the Peterloo massacre and the first mass movement for electoral reform, through the Chartists to the Suffragettes and beyond this country has a proud history of social protest aimed at holding our rulers to account. A lot has been said recently about what democracy is and what it means to be democratic. Understandably the present occupant of 10 Downing Street believes she is democratically obliged to deliver the will of the people as expressed in June 2016 in the referendum.

At what point however, did anyone sign up to a democracy in which we were are only asked for our opinion once?