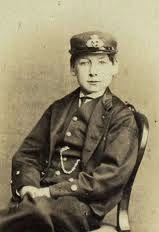 Robert Rayhnam cut a miserable figure in the dock at Mansion House Police court. The 14 year-old kept his head down, hardly spoke, and struggled under the withering glare of the Lord Mayor who sat as the City’s chief magistrate.

Young Robert, who was dressed respectably, had squandered a chance in life denied to very many boys of his class. He’s secured a position at Hackett & Co. a firm of ship agents as a messenger. It was a low paid but responsible job and Robert was trusted with money and cheques and so he had access to the company safe.

Sadly one day temptation got the better of him and he pinched a bag containing £11 and 10s. The bag, which also held notes and memos, was soon lost and Robert was questioned. He denied taking it but a search of the premises turned up some of the bag’s correspondence alongside private papers that belonged to the lad. Confronted with this Robert broke down, admitted his crime and begged for mercy.

His father was called who took him home. In looking through the boy’s papers Mr Hackett found a receipt for £9 for three month’s board and lodging, paid in advance. When he investigated further Hackett  discovered that these lodgings were in the house of man whose daughter Robert had been ‘courting’. So he wanted the money to impress his sweetheart’s father and demonstrate he was a worthy candidate for her  hand. Instead he merely showed himself to be dishonest and unreliable.

Robert’s employer was not ‘vindictive’ (in his words) but the boy had to be corrected. He asked the Lord Mayor if it would be possible to send Robert to a reformatory school. The Lord Mayor asked the boy’s age.

‘He was 14 in August’ Robert’s father replied.

‘Then he is too old for a reformatory’, intoned the magistrate.  ‘What have you to say to this charge?’ he demanded of Robert.

‘Are you desirous that the case should be dealt with here, and that you should not be sent to the Old Bailey for trial?’

Robert said nothing, keeping his head bowed, and probably hoping the ground would swallow him up. The court’s officer leant in and Robert said something to him. ‘He wants to go to a reformatory your worship’, said the officer. ‘He cannot do that, he is too old’, said The Lord Mayor. Robert pleaded guilty and was remanded for three days so they could decide what to do with him.

Despite his crime it is hard not to feel sorry for Robert. He made a bad mistake and paid the price for it. The minimum he could expect was the loss of his job and any reference that might allow him to secure a similar one. He’d undermined his relationship with his father, the father of the girl he loved, and probably ended that relationship in the process (as it was unlikely that her father would allow the pair to see each other). Prison probably awaited him, if only for a few months.

Thereafter he’d be scarred by his experience. His best line of action probably lay in leaving the area he grew up in and seeking a fresh start somewhere else, perhaps with the forces, or on one of the many merchant ships that plied their trade at the London docks. Let’s hope there was a happy ending.

[from The Morning Chronicle, Wednesday 23 February, 1859]