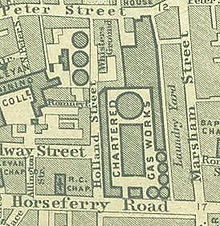 Domestic violence was rife in late Victorian London but even given that this case is horrific. William Meades was young, ‘able-bodied’ and unemployed. I rather suspect that he was unemployed by design not by accident and existed by exploiting others, most obviously his partner, Louisa Stammers.

The couple had lived together for nearly a year in Laundry Yard, (off Marsham Street) Westminster. Meades pimped Louisa, forcing her to go out on the streets as a prostitute to keep him in drink, food and shelter. By early 1899 Louisa had fallen pregnant by William but that didn’t stop him sending her out to earn money for him.

On 1 February things came to a head: Louisa hadn’t managed to get any ‘business’ and came home empty handed. A row ensued and Meades beat her up, kicking her in the stomach and face with his boots, and stabling her with a shoemaker’s knife in the forehead.

Louisa was hospitalized and treated by Dr F. F Bond at Westminster. She recovered and on the 7th she appeared at Westminster Police court to press charges against her lover. Dr Bond gave evidence that the cuts were consistent with the knife that was produced; Louisa said she was scared that the injuries she’d sustained would cause the premature death of her unborn child. In his defence all William said was that he hadn’t stabbed her, he’d just kicked with his steel toe-capped boots.

Mr Masham, the sitting justice, saw Meades for what he was – a misogynistic thug – and handed him a six month prison sentence with hard labour for the aggravated assault on Louisa. He added a further three months for living on immoral earnings. Whether that nine months away was enough to mend his ways is unlikely but at least it gave Louisa a chance to escape him, and maybe find a safe place to raise her child and stay off the streets.