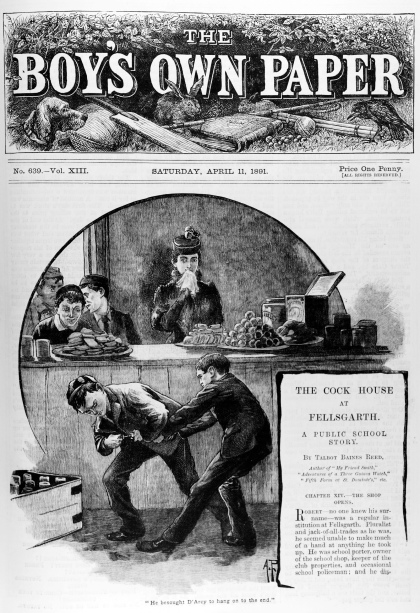 For anyone that has read the Famous Five books, or Swallows and Amazons  this story might chime with memories of childhoods past. Today children seem to be hard wired to televisions, computers, or mobile devices, playing video games or ‘chatting’ with friends via social media. In the past – in the days before ‘technology’ – kids played in the street, built tree houses, and had ‘adventures’.

For the record I’m not sure exactly how trueand of that is, it may yet another myth of a British past that never existed (the same one where everyone could leave their front doors unlocked, you could see a film and get fish and chips all for tuppence, the trains ran on time, and England were good at football).

Whether or not this ‘golden age’ ever existed I do suspect that working-class children and youth had a very different experience of life than their wealthier compatriots. Most working class children in the 1800s would have worked, few would have gone to school beyond a basic primary education, and very few would have enjoyed much in the way of ‘luxuries’. Sadly, it seems, a decade or more of austerity is bringing that experience of the past back to some working class communities today.

Children (in any period of history) will find ways to amuse themselves if they are not otherwise engaged in tasks or education by adults. They will also ape adults, and seek to find space away from adults to act our their own fantasies of life.

Ernest Digwood, George Cronin, James Harwood, and William Wallace (probably no relation) were four small boys intent on creating their own world within the adult one. If they’d lived in the countryside they’d have played in the woods and fields, climbing trees, stealing eggs for nests, swimming in ponds or rivers, and running through corn fields.

But they didn’t grow up in rural Essex, or Buckinghmashire, or anywhere very green at all. Instead they had to make their fun in West London, among the streets and houses of one of the world’s busiest cities. Boys being boys they explored their patch and found an empty house on Kensal Road, at number 174, close to the canal. Today the area has little trace of its Victorian past, rows of modern social housing and warehouse space make this part of London indistinguishable from many others. But in 1892 these four boys found a place to play.

They had established a den, built a fire in kitchen grate and had brought provisions. I say ‘brought’ because they certainly hadn’t ‘bought’ them. The quartet had been out in the surrounding streets and had found a delivery van with an ample supply of food. Helping themselves, they returned to the house with ‘eggs, two loaves [of bread], some sugar, liver, steak, and four bottles of gingerade’. It was a veritable feast but they never got to enjoy it.

Someone must have seen them or heard them in the property and reported it to the police. PC 412X arrived and arrested them, taking them before Mr Plowden at the West London Police court. James Harwood was known to the court, having been in trouble there before. The birching he’d received then clearly hadn’t acted as the deterrent it was intended. He and Ernest were sent to the workhouse, probably to be beaten again. George Cronin and William Wallace were released into the care of their parents but could hardly expect to get away without a slippering from their respective fathers.

They stole and the broke into an empty house, and of course that’s wrong. But at least they had an adventure, which is something, surely?