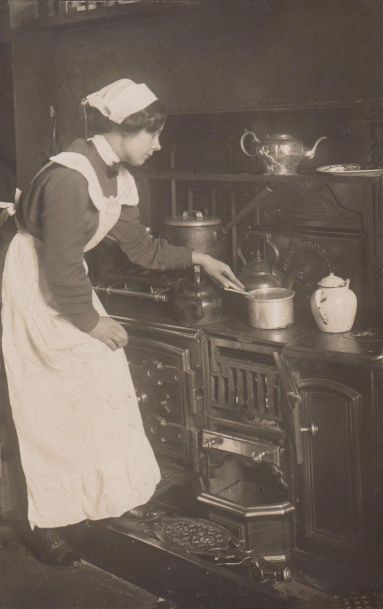 In December 1895 Edith Fenn appeared before Mr Lane at the West London Police court. Edith was just 15 years old and worked as a kitchen maid at 21 Courtfield Gardens, Earl’s Court. She had been asked to take food up to the youngest member of the household, Gwendolin Morris who was just 3 and a half years of age.

As she carried a tray with a bowl of cooked mincemeat along the landing Elizabeth Smart, a housemaid cleaning upstairs, stopped her. Elizabeth  could smell something bad, like ammonia, asked Edith what is was. The kitchen servant nodded to the jug of milk standing on a slate on the landing: ‘Perhaps it is in the milk’, she suggested, and carried on to the nursery.

The milk was there because Edith had brought it up earlier (as was her duty) and the little girl had rejected it. When the child tried it she spat it out complaining that it tasted ‘nasty’ and her nurse, Florence Powell agreed. Since the milk was slightly off the nurse decided to put it outside.

Now Edith had arrived in the nursery with Gwendolin’s meal of minced meat and potatoes. Immediately Powell recognized the smell of ammonia, just as Elizabeth Smart had. Edith set the tray down on a side table and went back downstairs to the kitchen. The nurse sniffed the meat and found it was certainly the source of the ammonia smell and handed it to the housemaid to take back to Mrs Longhurst, the cook.

What was going on? Had the cook inadvertently added ammonia to the baby’s dinner or was something more sinister at work?

Once the cook had seen what had happened she called for her mistress, and Mrs Louise Morris, the wife of an army officer, summoned a doctor. He examined both the milk and the minced meat and found that both were poisoned. The meat contained ammonia and the meat had traces of prussic acid, a cleaning agent used on gold lace. Dr Wyckham gave the little girl some ether as an antidote and she was later said to be recovering well in hospital.

A police investigation was soon underway and suspicion fell on Edith who had only been with the Morris family for six weeks. A bottle labeled ‘poison’ was found in the dustbin and in a subsequent trial at Old Bailey Edith admitted throwing it away after poisoning the girl’s milk and food.

Why had she done so, a nurse at the hospital wanted to know? All Edith would say was that she didn’t like taking the girl’s food up to her. At the police station she seemed much more anxious that her mother would find out what she had done. In the end she was charged with a form of wounding (‘Unlawfully administering a certain poison to Gwendolin Sutherland Morris with intent to injure and annoy her’) and, thankfully, no real harm was done to the child.

It was the end of Edith’s career as a domestic however. The jury recommended her to mercy on account of her age and the fact that two people stepped up to say that she had a previously unblemished good character. The judge sent her to prison for four months with hard labour. If she didn’t enjoy the tiresome trudge up and down stairs with a tray of food she was hardly going to prefer the treadmill and the crank and a diet of thin gruel.