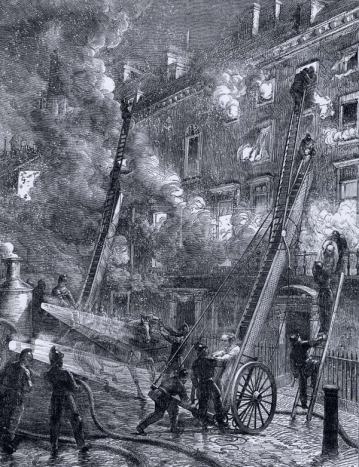 When Edward O’Connor got home from the pub he was disappointed that his wife hadn’t got his dinner ready. Mrs O’Connor was pretty used to this sort of situation, Edward was frequently drunk and when he was, he was unbearable. The 45 year-old shoemaker was a ‘quarrelsome’ fellow and not above taking out his frustrations on his spouse and their children.

This was nothing out of the ordinary for Victorian London of course, many women were victims of their husband’s unwarranted anger and violence and the summary courts bore witness to their occasional attempts to ‘get the law on them’.

However, on this occasion Mrs O’Connor hadn’t brought a charge against Edward, he had gone so far over the bounds of acceptable behaviour that he had found himself up before Mr Benson at Southwark Police court without his wife having to file a complaint.

This was because he’d come home to 18 Potter Street, Bermondsey in a drunken state and flew into a rage when he realized his supper wasn’t ready. He shouted at his wife and told her he would burn the house down with her and the children in it. She fled, clutching her offspring close to her and raised the alarm.

Meanwhile Edward stumbled over the fire and shoveled up a portion of burning coals which he then tossed onto the bed. As the fire began to take he staggered back to admire his handiwork. Soon afterwards the window was forced open and a policeman’s head appeared. PC Fred Palmer (45M) had arrived on the scene and rushed inside. Pushing Edward aside he quickly extinguished the flames and dragged Edward outside. The copper’s bravery undoubtedly saved the property and the lives of Edward and anyone else living there.

In court Edward was apologetic and said he had no memory of what he’d done. Mrs O’Connor spoke up for him (as wives and partners frequently did) saying that if the magistrate was lenient she would make sure her husband took the temperance pledge. She was sure he hadn’t intended to destroy their home or hurt her and the kids. The magistrate cautioned the shoemaker, warning him to stay off the drink and take better care of his wife and family. He then told him to find bail for his good conduct over the next six months and let him go.