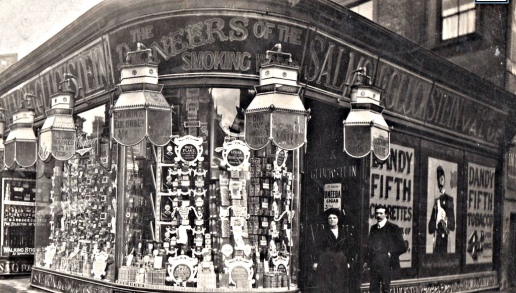 Mrs Sarah Cameron ran a tobacconist shop on the Broadway in Westminster, central London. One evening in November 1840 a young man  called William Meeton entered the ‘snuff and tobacco’ shop and asked for a cigar. He handed over half a crown and she gave him the cigar and his change (which consisted of ‘two shillings and four pennyworth of halfpences’).

Meeton scraped up the coin but after examining carefully it ‘threw down a shilling alleging it was bad’. He accused the tobacconist of trying to fob him off with forgeries but Mrs Cameron was sure the coins she had handed over were fine, and she said so. Now she suspected him of committing a crime and called for a policeman who soon arrived and arrested the lad.

William Meeton was charged at Queen’s Square Police Court with uttering – a variant of the wider crime of coining and forgery. While forging meant making false notes (and coming, fake coins), uttering described the practice of using or distributing counterfeit money.

The magistrate demande to see the coin in question. Sadly Mrs Cameron didn’t have it. Why not, Mr Burrell asked?

The young man had swallowed it she told him, along with several other shillings he had in his possession. It was a common enough ploy to get rid of the evidence (albeit temporarily). The chief usher of the Police Court informed his worship that that the accused was ‘well known’ to the court, which would have counted against him. However, without the proof that the shillings were bad there was little the justice could do. After some conferring Mr Burrell and his clerk agreed that no case could be made without the coins as evidence.

He turned to Meeton and told him that while today he ‘had been too sharp for his prosecutors’ his card was marked, and warned him about his future conduct. He was discharged, presumably to find the nearest privy!

NB a half-crown was worth 2 shillings and 6 pence so you can work out for yourselves just how much Mrs Cameron was selling her cigars for. No age is given for Meeton but this wouldn’t matter anyway in the context of the 19th century. There was no age restriction on buying or selling tobacco to minors until 1933. It still isn’t illegal for children to smoke but under 16 it is subject to parental control.