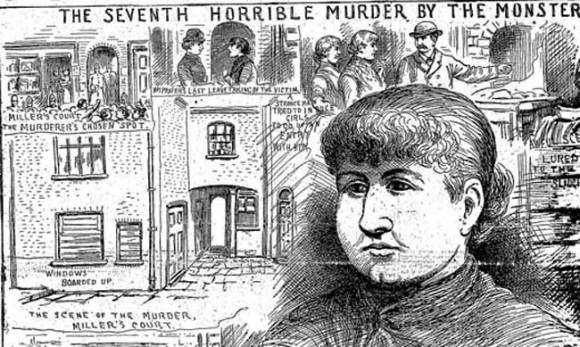 Today is the 130 anniversary of the discovery of the body of Mary Jane Kelly in Miller’s Court, Dorset Street, Spitalfields in November 1888. Mary Kelly was the fifth ‘canonical’ victim of the killer known only as ‘Jack the Ripper’ and hers was the most brutal of all the murders in the series.

Mary (or Marie) was found lying on her bed when her landlord’s man came calling for her back rent. He peered through the window at the horror inside and rushed to find his boss and then the police. No one that saw Mary’s mutilated corpse ever forgot how awful it was.

However, within a year the room in Miller’s Court had been re-let and the landlord, McCarthy, merely sent someone round to scrub the blood off the walls and floors. Rooms in Dorset Street were cheap and new tenants could hardly afford to be too picky if all they could afford was a room in the ‘worst street in London’.

A year after the murders seemed to have ceased although many researchers are far from convinced the killer had stopped with Kelly. My own research suggests he continued into the early 1890s only stopping when his own body succumbed to the disease that killed him.

Meanwhile the day-to-day business of the Police courts rumbled on. Over at Marlborough Street Mary Jones appeared in early November 1889, charged with being drunk and disorderly, a commonplace offence at this level of justice.

Mary had been arrested after she had resisted arrest. Mr Newton (the presiding magistrate) was told that she had entered the King’s Arms in Titchfield Street late the previous night and had caused a scene. She’d asked for ‘two of unsweetened and a bit of sugar’ but the landlord refused to serve her as she was already quite inebriated and he had a care to his license.

He called in the passing street bobby, PC 282D to eject her and she squabbled with them both. She shouted abuse at both men and had to be restrained. In court she was apologetic (presumably having sobered up) and begged the magistrate’s “parding”.

She had been in hospital that day she said and explained that after she’d been released she’d felt dizzy. She’d gone into the pub to rest she insisted, and was as surprised as anyone when ‘this ‘ere perliceman comes rushing in, and, with “Out you go, missus,” capsizes me into the street’.

Mr Newton asked her where she lived.

‘Lisson Grove, your Wurchip’ she replied.

‘Then go back to Lisson Grove sharp, and don’t come back here again’ he told her.

And with that she stumbled gratefully out of court as the public gallery collapsed in laughter.