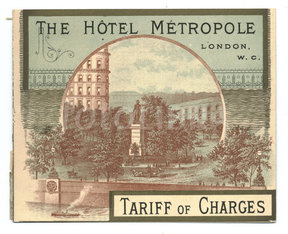 We all know that staying overnight in a London hotel can be expensive. The closer you are to the centre the higher the prices and I’ve talked to people who have booked ‘cheaper’ accommodation in London only to find that they are actually commuting in from Hertfordshire!

So it is well known today that the capital is expensive but what about in the past? Was London a trap for visitors in the nineteenth century as well?

An unnamed gentleman and his wife had come up to London for the night and checked in to a ‘well known hotel and the west end of town’. They took their room and ordered some food and drink, stout for the lady and a brandy and soda for her husband. When room service arrived the waiter brought them a pair of wax candles and the gentleman attempted to send them away.

‘My wife and I are very moderate persons, and have no desire to pay for extravagances, so common candles [i.e tallow ones] will do for us quite as well as wax’.

The waiter said they could do as they liked but they would be charged for wax ones whether he left them or not, so they might as well enjoy them. The hotel clearly had a policy of charging customers for ‘extras’ (a bit like the way that some hotels today add hidden items to your bill).

In the morning the guests were presented with a bill that they felt was extortionate:

So the overnight stay had cost the couple about £100    in today’s money, the candles alone were £8.50. Now £100 for one night in the west end may not sound too much given  that included breakfast, drinks and supper but in 1830 that represented a week’s wages for a skilled tradesman whereas today £100 might buy you a plumber or carpenter for a day. In reality then the hotel had charged them about £500 for their night’s accommodation; today you might easily pay that or more.

The gentleman refused to pay his bill on the grounds that he was being overcharged so the hotel manager seized his luggage. The man took his complaint to Bow Street and Mr Halls. The magistrate agreed that the bill was excessively high but there was nothing he could do about it, the hotel was well within its rights to charge whatever they liked and told him that ‘persons that went to houses like the one in question went with their eyes open’.

The gentlemen left in a grump muttering that he would put the matter in the hands of his solicitor.