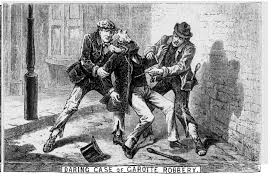 Prompted by a facebook post from the Police historian Neil Bell I decided today to go back to 1862 to see if there was any hint of that year’s big crime story in the Police court reportage. 1862 was the year that Sir Hugh Pilkington MP was attacked by robbers on his way home from the Houses of Parliament. He was attacked from behind, throttled (‘garrotted’) and robbed. It was a form of highway robbery (‘mugging’ we would probably call it) but it sparked a moral panic about returning ‘ticket of leave’ criminals and the perceived ‘softness’ of the criminal justice system.

The panic died done fairly quickly and historians have shown that in reality street crime was no more prevalent in 1862 than it was in years either side of that; it was the reaction of the police, public and government to the press coverage that was the real story, not the incidents of ‘garrotting’ themselves.

Meanwhile over at Worship Street Police court things were a little more mundane. No garrotting or otherwise dangerous street crime here, just a case of unlicensed pawnbrokers. It’s still interesting however, as we learn much more about the everyday life of the Victorian city through these snippets of ‘real life’.

William Murray and James Spriggs were both brought up as offenders against the Excise Act. The prosecution – led by officers from the Inland Revenue – alleged that the men had been carrying out the business of pawnbrokers without have the required license to do so. The pair were trading as chandlers (sellers of all sorts of cheap goods) rather than pawnbrokers, but were proven to have extended loans to local people in the East End in exactly the same way as ‘brokers operated.

It was a well executed investigation and both men were duly convicted. The magistrate, Mr Leigh, handed down fines of £12 10s plus costs to each man, the minimum he was obliged to levy. Each was warned that a failure to pay would result in them going to prison for a month.

The excisemen reported that they had been investigation many more instances of this sort of offence in recent months, and mostly in East London. These two shopkeepers were ‘ostensibly’ chandlers in Bethnal Green – hardly a well paid occupation – but both could afford to employ a lawyer to defend them. They were doing very well out of this sideline to the day job.

The court was told that there were plenty of ‘leaving shops’ in East London where the poorest could get short or medium term loans at very high interest by pledging their possessions as security. The magistracy were aware of it and two justices in particular, Mr Beard and Mr Abbott, condemned the practice and assured the public that they would be prepared to inflict the maximum penalty of £50 on offenders.

It strikes me that leaving shops were operating very much like the high interest pay day loan companies like Wonga, which today offer (or used to offer in Wonga’s case) much needed cash but at huge cost in terms of interest. These companies profit from the very poorest in society and the same practice, albeit a less sophisticated version, was taking place in the 1860s.