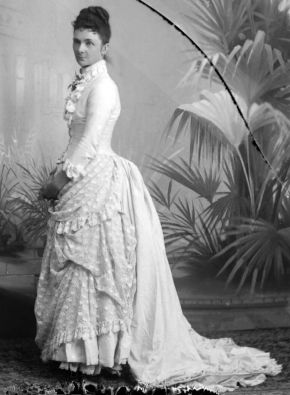 Mr Tahrir-ud-din Ahmed was an Indian student studying in England. He had taken up residence at 1 Colville Gardens in fashionable Kensington and so must have come from a wealthy family in British India. He would have made an impression in his fine clothes and he certainly caught the eye of one young woman at London Bridge station. However, her intentions towards him were far from honourable, as Tahrir was about to find out.

Tahrir had gone to the station on the 13 July to bid farewell to a friend who was travelling back to Brighton. As he entered the waiting room he noticed a fashionably dressed young lady sitting on her own. He enquired after her and she explained that she was waiting for her parents to arrive, as they were expected on an incoming train from Brighton.

She gave her name as Blanche Coulston and said she’d recently arrived from Australia and knew no-one in the capital. She then asked Tahrir if he would mind waiting with her until her parents arrived; the young man could hardly refuse such a request, and agreed to look after her.

One can imagine the scene: two young people, of probably equal social standing, enjoying each others’ company regardless of any presumed cultural differences. Tahrir was acting like a gentleman in protecting a lone woman from any potential dangers and sharing the company of an attractive young lady of fashion and style in the process. So when Miss Coulston’s parents failed to appear and she suggested they dine together, Tahrir agreed straight away.

They took the young lady’s landau to the Temple and back, and when Mr and Mrs Coulston still failed to make an appearance Blanche suggested they continued their friendship by retiring to her family’s rooms near Regent’s Park. Tahrir and Blanche climbed back into the coach and headed to 3 Stanhope Terrace where the Coulstons had a suite. After a supper Tahrir slept in Blanche’s father’s room and the next morning they breakfasted together.

It was all going very well, except, of course, for the mystery of the missing parents. The pair headed for the Grosvenor Hotel as Blanche thought they might have arrived while she and her new friend were absent for the night and had checked in there instead. When they discovered they hadn’t Tahrir suggested she send them a telegram and they returned to his lodgings to do so.

Having sent her message the pair returned to Stanhope Gardens as Blanche said she needed to collect some things she had left at a school nearby. I presume like many young ladies of quality, she had worked as a teacher or governess. The pair went back to her rooms and she said there would be a short delay while her landau was made ready. They had lunch and Blanche suggested that Tahrir might like to freshen up in her father’s rooms.

The Indian student thanked her and was about to head off to bathe when she asked him if she might admire his gold rings. He had three on his fingers and he gladly handed them over to her.

That was a mistake.

When Tahrir had washed and shaved he returned to the family’s drawing room to find Blanche, but she wasn’t there. He rang the bell and summoned the landlady who informed him that she had left sometime ago. Tahrir took a hansom cab to London Bridge, assuming perhaps that she had news from her parents.

She wasn’t there so he returned to Stanhope Gardens. At 10 the carriage came back without her. Tahrir went home requesting that the landlady wire him should Miss Coulston return. In the morning he’d heard nothing and so he informed the police.

A month later Tahrir was at the Fisheries exhibition when he saw Blanche in company with a man. He found a policeman and had her arrested. On Wednesday 15 August 1883 Blanche was brought before the sitting magistrate at Marylebone to face a charge of stealing three rings worth £20. She had the rings but claimed he had gifted them to her, something he strongly denied.

The court heard from Henry Selby who ran a livery stable with his brother. He deposed that Miss Coulston had approached him to hire a carriage and had offered two gold rings as security. She had taken the carriage but failed to pay for the hire, so he’d kept the rings and told the police. Detective sergeant Massey had tracked the third ring to a pawnbroker’s on Buckingham Palace Road. He’d established that Miss Coulston claimed (to several people it seems) to have bene the daughter of a Brighton doctor who was in the process of relocating to London.

On the strength of this, and her plausible persona, she was defrauding all sorts of people in the capital. The magistrate had little choice but to commit her for trial.

I rather suspect that everything about Miss Coulston was fake, including her name. No one of her name appears at the Old Bailey and perhaps that is because she gave a false name. Or perhaps the prosecution case was weak or Tahrir, having recovered his property, chose not to press charges. Maybe he put it all down to experience and decided to forgive her. The lesson is clear however, people aren’t always exactly what they seem.