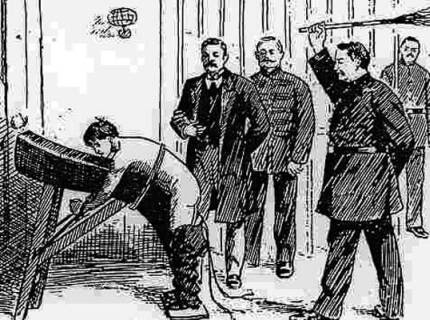 When Louis Perry sent his errand boy off to deliver some work for him he gave him strict instructions. Lipman Forkell was to take some boots to his customer on a barrow and then drop the barrow off at the hire place. The lad was told not to forget to collect the 10d change due from his deposit of a shilling.

However young Lipman – a 12 year-old boy who lived in Eastman Court, Whitechapel in London’s East End – carried out the task but failed to return Mr Perry’s money. This was a second chance for Lipman; he’d been accused of stealing money before but had been let off with a warning. He wasn’t to get a third chance and the boot maker was determined to teach him a lesson.

On Thursday 7 August 1879 the boy was brought before Mr Bushby at Worship Street Police court and formally charged with stealing 10d in silver coins. The magistrate warned Mr Perry that he was also liable to be prosecuted, ‘for employing  a lad under age’. On this occasion he got off with a warning.

Lipman was not so fortunate. The magistrate told him that to have taken to stealing at such a young age was very serious and he would be punished for it. On top of sending him to prison for three days Mr. Bushby ordered that the boy be given ‘twelve strokes of the birch rod’. These would be administered by a local policeman, which helps explain why the ‘old bill’ were far from popular in the district.