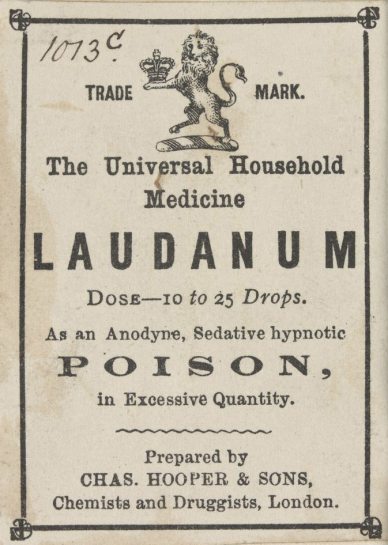 Most of the drugs that are prohibited by law today were legal in the nineteenth century but contemporaries recognized that there was a problem with drug use. Opium eating and smoking was widely condemned and attempts were made to restrict its use after 1868 by only allowing its sale by registered pharmacists. However, it wasn’t until 1908 that opium, morphine, cocaine, and some morphine derivatives were classified as ‘poisons’.

Most of the concern was with alcohol, not recreational drugs, and the real moves against cocaine, cannabis, psychedelics and heroin came well into the twentieth century.  Cocaine was prohibited in 1916 amid concerns about its use in the armed forces, and after the First World War Britain had to take steps to introduce a dangerous act under the terms of the Hague Convention in 1920 and later when we became a full member of the League of Nations. Amphetamines were not controlled until 1964, heroin three years later, while cannabis (which had been banned as an amendment to the Dangerous Drugs Act in 1928) use grew in the 1960s and many prosecutions followed.

Nineteenth-century London didn’t have a problem with drugs but there were prosecutions in relation them. In June 1883 William Dell, a druggist’s assistant, was brought up at the Guildhall Police court accused to stealing over £25 worth of drugs from his employer. In today’s money the amount he’d stolen (£25-30) would be around £2,000, so it was not an inconsiderable sum.

We have no idea from the report exactly what drugs Dell was supposed to have taken from Messrs. Evans, Lescher, and Webb at 60 Bartholomew Close, or whether he was planning on selling them around Rotherhithe where he lived. His lodgings on Ilderton Road were raided after he was searched by the pharmacy manager as he left work.

Mr. Forsyth (the manager) said all employees were subjected to a search after a stock take revealed that chemicals were missing. Dell was clean but he hadn’t got his usual bag and when that was brought down about £2 worth of drugs were discovered inside. Much more of the company’s property was discovered when lodgings were searched.

In court Dell pleaded guilty and asked the magistrate to deal with him summarily, so he could avoid a jury trial and a stiffer sentence. Alderman Fowler acceded to his requests and sent him to prison for four months at hard labour.

Everyone will have their own opinion of drug prohibition. Today there is a well-established drug culture in Britain which has survived 100 years of attempts at restricting it. While many young (and older) people die of drug-related conditions and many more suffer from the mental health related effects of non-prescription drugs, the main consequence of 100 years of prohibition has been to criminalize tens of thousands of drug users and to allow a criminal network of drug pushers to develop. Just as the 18thamendment to the Constitution of the United States in effect created the Mafia, the banning of recreational drugs has created the gang culture and levels of organized crime in the UK (and abroad) that we see today.

People will take drugs, and people will be damaged by taking drugs, but there is nothing the state can do to prevent this happening by prohibition. Education and a safe (or safer) environment for drug use is the only way that society can hope to beat addiction and the crime that flows from it.