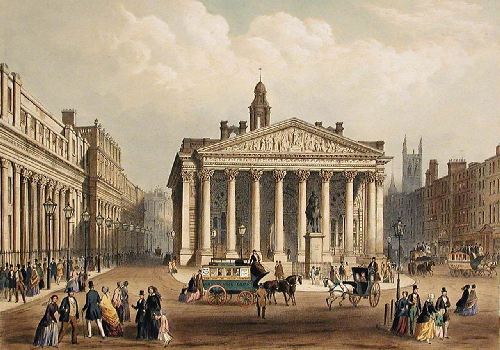 The Royal Exchange and Bank of England

PC Batchelor was on his beat in Threadneedle Street at one in the morning when he saw smoke coming through the railings by the Bank of England. Was the ‘old lady’ on fire? He quickly discovered a fire at the base of column that connected to one of the gas lamps that lit the street. As the policeman set about tackling the small blaze he saw a figure leap over the railings and run off.

He ran after the escapee and collared him. His quarry was a young lad of 13 named Michael Buckley. He arrested him and took him before the magistrate at Mansion House in the morning.

The boy explained that he and several other lads had taken to sleeping rough within the boundaries of Bank and tended to curl up near the base of the lamp columns. They dragged in straw to make beds that were a little more comfortable than the hard stone floors or pavements. I imagine this was their version of the cardboard boxes that modern homeless people use to create a crude mattresses.

However, Micheal told the Lord Mayor (who presided as the City’s chief magistrate) that one of the lads had fallen out with the others and left, but had set fire to the straw bedding ‘in revenge’.

The court heard that had the fire melted the pipe that carried gas to the  street light ‘much damage might have been caused to the interior of the building’, hence the paper’s overlay dramatic headline that read:

‘Setting fire to the Bank of England’.

The Bank was not inclined to prosecute the lads for their trespassing but this didn’t stop the Lord Mayor – Sir Thomas Dakin – from sending the lad to prison for a week at hard labour. He said something had to be done to prevent boys from sleeping rough on the Bank’s property but his concern seemed to be with the potential risks of fire or other damage, not with the poor lads’ welfare.