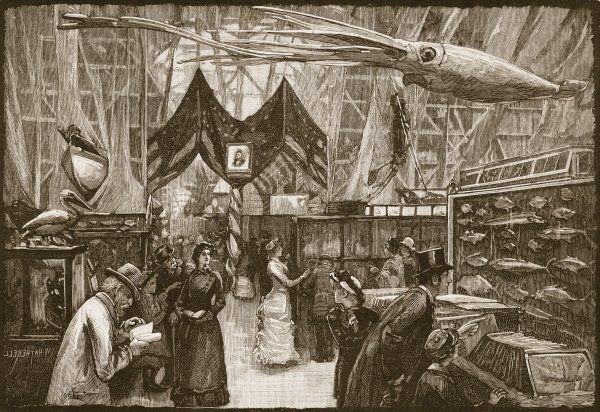 Between May and October 1883 thousands of visitors flocked daily to South Kensington to see what was the largest ever ‘special event’ to staged anywhere in the world ever. In total some 2.6 million people crowded in to the Royal Horticultural Society’s grounds (behind the Natural History museum) to see the International Fisheries Exhibition.

The exhibition housed a huge collection of marine life from all over the globe so we might think of this as the Victorian equivalent of modern Britons tuning in (also in their millions) to watch David Attenborough’s Blue Planet television series on Sunday nights. The Spectator’s report of the exhibition gives a flavour of the event:

‘there is the tetradon, a knobbly, bladder-shaped creature, used by the Chinese as a lantern, when he has been scooped ; a collection of beautiful shells, and a hammer-headed shark from Formosa’. 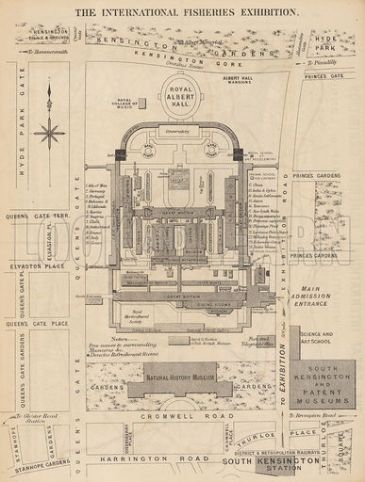 It cost just a shilling to enter the exhibition and there was so much to see that many must have made multiple visits in the five months during which it ran.

One pair of visitors certainly seem to have thought the outlay was worth it but they were engaged in a very different sort of  ‘fishing’.

William Williams and John Nesbett were well-established members of London’s criminal fraternity. It is quite likely that they had been involved in crime in some way of another for the entirety of their lives. Now, heading for the twilight of their lives, they were still at it.

The crowds at South Kensington provided easy pickings for the pair of practised thieves. As men and women pressed themselves up close to the glass of the aquariums to gawp at the strange creatures within Williams and Nesbett took advantage of the cramped conditions to dip pockets and lift purses and jewellery.

However, when they attempted to steal an old gentleman’s watch and chain they were seen. Realising their peril they tried to beat a hasty escape but now the packed halls worked against them and they were nabbed as they tried to escape. On the next day they were presented before Mr Sheil at Westminster Police court.

The men denied doing anything and nothing was found to incriminate them. This was quite normal of course; pickpockets were adept at ditching stolen items so that they could appear ‘clean’ if arrested. A detective appeared to give evidence that they were known offenders and the ‘associates of thieves’, and that was enough for the magistrate to remand them. If they could be shown to have previous convictions that would probably be enough to earn them some more time in prison.

Indeed it was, because we find William Williams in the Middlesex House of Detention records convicted as an ‘incorrigible rogue’ in early July. He was sent to Wandsworth Prison for three months having been committed by Mr Shiel’s colleague Mr Partridge at Westminster on the 27 June. He was 62 years of age. I can’t find Nesbett but he may have given a false name or simply been lucky on this occasion.

One thought on “Fishy goings on at South Kensington”