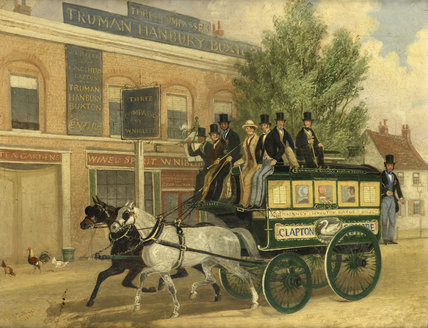 Recently I have become quite interested in the dynamics of traffic in Victorian London. I’m not normally so fascinated about the minutiae of everyday life but I’m writing a book which explores the Whitechapel murders of 1888 and posits a potential solution. Myself and my co-researcher suggest that the transport network of the capital might well be an important factor in the murder series for reasons which, well, I just cant go into before the book goes to print. I’ll keep you informed.

With transport in mind today’s story concerns a collision, between an old form of transport (an open carriage – not unlike that which carried Harry and Meghan away from their wedding) and a ‘modern’ one (an omnibus). It took place at mid century and also brings together members of very different classes in Victorian society.

Lady Thesiger, the wife of Sir Frederick Thesiger the Conservative politician (and future Lord Chancellor) was sitting in an open carriage while it moved slowy along on Cockspur Street. It was a Tuesday afternoon and it was clear and dry, as the carriage’s hood was down and Lady Thesiger had a good view of the street around her.

As her coachman began a manoeuvre to cross the road and ‘park’ outside Strongi’th’arm’ the engraver’s shop, she saw an omnibus travelling quite fast in their direction. Her coach driver waived at the ‘bus driver but he either didn’t see the signal or ignored it. She later described what happened to the sitting magistrate at Marlborough Street Police court:

‘She saw the omnibus coming along very fast, and her impression at that moment was that the omnibus would run into the carriage. In an instant afterwards she found the pole of the omnibus across her chest and the head of one of the horses in her lap. It was a miracle she escaped serious injury’.

That a collision took place was not in doubt but when it came to court, and the omnibus driver – Roberts – was charged, a debate ensued as to whose fault it was.

After Lady Thesiger had given her testimony Mr Bingham heard from several other witnesses who corroborated her version of events. They deposed that the carriage was travelling at a sedate 5 miles and hour while the omnibus was doing nearly twice that. We might note that neither vehicle was going very fast by modern standards.

Roberts offered an alterative explanation of what had happened. He said the he’d been going downhill at ‘a moderate pace’ when the carriage had moved over to the wrong side of the road and into his path. The coachman had not indicated what he was doing and by then it was impossible for him to avoid the collision. It wasn’t his fault; it was Lady Thesiger’s driver’s.

He brought witnesses that backed him up including a local baker who had seen the whole thing unfold. He refuted the evidence about the speed of the vehicles, arguing that it was carriage that was moving more quickly. He said that the carriage driver should have waited until it was safe to cross the street and not have simply turned into the flow of the traffic.

Mr Bingham now had a couple of things to consider, one of law and one of fact, as he put it. The point of law was who had the right to cross the road in this case, while the fact referred to whether the coachman had given a signal or not, and if this signal had been seen or ignored by the omnibus driver ‘because he had more weight of metal with him’.

I think by that he meant simply that the omnibus driver was larger and so less bothered about a collision because it wasn’t his vehicle that was likely to get damaged by it. As someone who drives up and down the motorway several days a week in a small car I am quite aware of the careless driving of some larger vehicles who clearly think they are unlikely to come off as badly as me if I fail to avoid hitting them when they’ve pulled out in front of me.

So in the end the magistrate reserved judgement so he could make some enquiries. He promised an early verdict and was back in court the very next day to deliver it. He gave a lengthy explanation of his judgement which basically concluded that had the omnibus driver acted carelessly or wilfully then it would have constituted an act of ‘wilful and  perverse recklessness’ and he could impose a penalty. However, Mr Bingham didn’t believe that had been proved in court and so he dismissed the complaint but said that the Thesigers could of course take this before the civil courts.

Interestingly at that moment Sir Frederick was also in the courts, as a defence lawyer in a libel case. He lost that one too.