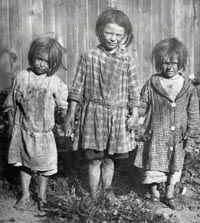 Alice and Rosina Purcell were homeless. The sisters survived on whatever they could scavenge around Spitalfields Market, living on ‘rotten fruit and begging of the salesmen’ there. Thomas Williams was also destitute and had no other means of supporting himself besides begging. All three of them fell foul of the laws against vagrancy and begging and in late April 1872 were arrested and taken before Mr Hannay at Worship Street Police court.

Alice and Rosina must have struggled to see over the dock because they were just children, aged between 6 and 8 years. A school board officer named Mr Gear had picked them and enquiries were made by the local police. The girls’ mother was dead and their father, who worked as labourer at the London docks, ‘left nothing for them’. They were both ‘clothed in the dirtiest of rags, although they looked cheerful and intelligent’.

The magistrate wanted to send them to school but they were Protestants Mr Gear told him, and at present there were no vacancies in Protestant schools so the pair were remanded for a week and sent to the nearest workhouse.

As for Thomas (who was 13), he had been brought in by police constable Barker (141N) and had also been remanded to a workhouse and in the meantime a school had been found for him. Here the school option was complicated however.  The choice of a Catholic school was based on information given to the court when first the case was aired a week ago.  It was claimed, by the landlord where his family had formally lived, that the lad had been brought up a Catholic. Thomas, who had lost both his parents, hadn’t contradicted him. However now Thomas objected to being sent to a Catholic school and said that he had in fact been a pupil at St Mark’s Protestant school in Hoxton.

Mr Hannay asked him why he hadn’t said this earlier to save the confusion? Thoams admitted he hadn’t wanted to say anything in court, possibly because the poor lad was simply bewildered or afraid.

Religion was important and so even though these children were paupers with no parents to speak for them (or at least as in the girls’ case who were prepared to take responsibility for them) Mr Hannay was determined that they should be educated within the tenets of their faith, and where possible, I expect, he would always have favoured the reformed church over the Roman one.

If only society was as bothered about the fact that three children were wandering the streets of the world’s largest city starving and living on their wits quite as much as they cared which version of the Christian doctrine was used to educate them. It smacks, to me at least, of gross hypocrisy.

One thought on “‘Clothed in the dirtiest of rags’; three little urchins at Worship Street.”