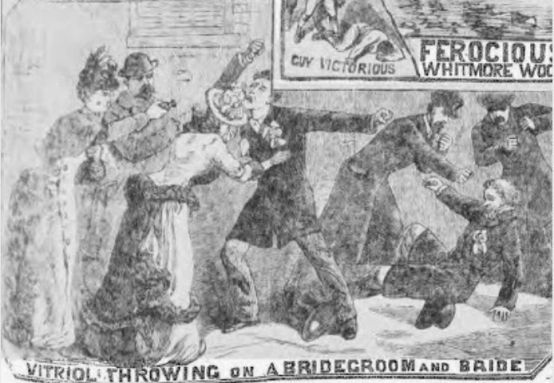 This is a shocking case with echoes of recent acid attacks on London streets. Derryck John has just been sentenced to 10 and a half years in prison for spraying a corrosive liquid into the faces of moped riders as part of an attempt to steal their vehicles. The 17 year old refused to name his accomplice, the Wood Green court was told, and he remains at large.

In 1889 The Worship Street Police Court witnessed a case that was almost as alarming, and certainly resulted in similar ‘life changing’ injuries as suffered by John’s victims. William Green was just 14 years of old but he stood accused of ‘throwing corrosive liquid’ over another young lad because the pair had an argument in the street.

Green worked as walking stick maker and on the 2 April 1889 his master sent him out to purchase a pint of nitric acid. As he approached the workshop he met the other boy, Jacob Rosenberg. The pair were acquainted but hardly friends. Within moments Green started abusing the other lad, one imagines Rosenberg replied in kind.

The name calling escalated and Green ‘flung some of the acid he had in the bottle full in Rosenberg’s face’. The liquid went over his face, hands and his clothes and burned terribly. Rosenberg appeared in court as a witness, his face ‘hidden by bandages’. The magistrate committed Green for trial.

At the Old Bailey Jacob testified that anti-Semitism was at the heart of the dispute. Green had shouted that he was a ‘Jew bastard’ and ‘should be at home in my own country’ and challenged him to a fight. When he declined to fight Green hurled the act and ran away. Rosenberg, who had already lost an eye to smallpox, was left in agony and taken to the police station to have his wounds dressed.

However, there was a counter allegation that Rosenberg had been the aggressor, perhaps because Green regularly tormented him. It was suggested that he had either provoked Green or had shoved him, spilling the liquid over himself.

Green was given a good character and the injuries to Rosenberg were described as being ‘nothing serious’. There was enough doubt placed as to Green’s intent and so he was acquitted of the intent to cause injury and a lesser charge of common assault. One can’t help but feel that the court didn’t want to take the side of the Jew against an ‘honest’ English working lad. Anti-Semitism was rife in the 1880s, especially in the crowded East End of London where so many immigrants had arrived in the last few years.