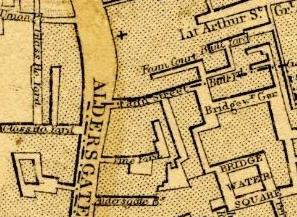 When William Bennett was first brought before a magistrate at the Guildhall Police court he was remanded in custody for a few days. The justice, Alderman Stone, had wanted to hear from a key witness who had failed to turn up to give evidence. He remanded Bennett and issued a summons to bring the witness to court.

On Monday 8 April 1872 Bennett was brought up from the cells and once more faced his accuser, a shopkeeper named Mr Edgar who traded from premises on Fann Street, off Aldersgate Street. Bennett was charged with stealing a swing mirror which, according to Edgar, he had brazenly stolen  on the 25 March. Bennett, in company with another man had simply walked into Edgar’s shop  at two 2 in the afternoon and walked out with the mirror.

There was a shop right opposite that of Mr Edgar, run by a woman named Emily Hollingsworth. She was supposed to come to give her evidence but had not appeared. Now she was in court because of the summons and testified that she had seen Bennett and another man take the mirror as Edgar alleged.

The alderman magistrate demanded to know why she hadn’t appeared when the case was first heard. Emily replied that she had in fact come to give evidence before but had met Bennett’s mother in the  courtroom. Mrs Bennett asked her:

‘to throw doubt on the identity of the prisoner, and she refused to falsify her evidence, but said she would rather leave the court altogether than tell a falsehood’.

Next to appear was one of the warders from Cold Bath Fields prison who identified Bennett as someone who been previously convicted. Herbert Reeves said that Bennett had served a two year sentence recently with hard labour and added that a gaoler at the City prison would attest to him being in there on more than one occasion as well. This probably sealed the man’s fate and Alderman Stone fully committed him to take his trial before a jury.

He then turned his ire on Mrs Bennett, reprimanding her for ‘tampering with the witness’. She was unrepentant, telling the magistrate that her boy was a ‘good son to her, and she had done no more than any mother would do’.

When it came to the Old Bailey William pleaded guilty as charged. His previous convictions did count against him and he was sentenced to seven years’ penal servitude by the judge, for stealing a mirror valued at 5s 6d (about  £17 today).