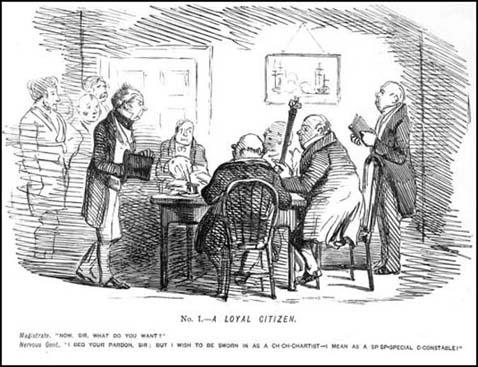 We all love a mystery don’t we? When you dip into a newspaper that was published 170 years ago sometimes things just don’t make sense on their own. Take this report from April 1848 at Marlborough Street Police court for example. The report is headed ‘Special Constables’ and starts by declaring that:

‘The swearing in of special constables continued throughout the day, without intermission, in consequence of the large numbers of persons of all ranks that presented themselves at this court’.

Historically special constables were sworn in to police particular events (notably public executions) or at a time of crisis (during riots for example). The practice both preceded the introduction of the New Police in 1829 and continued afterwards. You can still serve as a ‘special’ today so long as you can give four hours of voluntary service a week.

In April 1848 the press reported that hundreds of men had come forward in London to swell the ranks of the professionals: ‘There could not have been fewer than twelve or fourteen special constables sworn in yesterday’ the The Morning Post noted. Men were joining en masse from businesses that employed large numbers – not unlike the ‘Pals’ battalions later raised during the First World War.

‘Messers. Cottam and Hallam’s men, to the number one hundred, were sworn in. About 120 men in the employ of Messers. Dowbiggin, the upholsterers, were also sworn in; and Mr. Lumley, the lessee of the Opera, furnished 63 able men’.

But it was not just the working men of London that were signing up in their droves to represent their communities and employers, ‘men of rank’ were also volunteering for action.

A tradesmen approached the sitting magistrate at Marlborough Street with a query. He said he had men who were keen to serve but were concerned that they would not, as he believed was the principle of specials, be used to support policing in their own community, but instead be deployed elsewhere. Mr Bingham thought to reassure him:

‘It was perfectly well understood’ he said, ‘that special constables were for the protection of their own immediate neighbourhood only, and so long as they assisted to preserve the peace of their own locality, they need be under no apprehension of being called elsewhere’.

This calmed the tradesman who said he now suspected many more of his employees would be presenting themselves at the court in due course. The paper reported that Mr Bingham would now sit in tandem with his colleague Mr Hardwick tomorrow, so they could get through the numbers of men wishing to be sworn.

Nowhere, however, does it explain why so many specials were being called for or were volunteering. For this you need to know your history, particularly the political history of Britain in the mid 1800s. 1848 has been described as the ‘year of revolutions’ because of events in Paris, Sicily, Germany, the Habsburg Empire and elsewhere. Everywhere the desire for liberal democracy clashed with autocracy and in Britain, a nation more ‘democratic’ than some, we had our own taste of a popular movement for change: Chartism.

This is not the place for a careful analysis of Chartism but it was both a democratic movement and a revolutionary one. The Chartists wanted to extend the vote to all men, by secret ballot, and the abolition of the property qualification that effectively excluded all but the wealthy from standing for parliament. Indeed of the six demands they made only the call for annual elections has come into being. At the time however, these were radical demands and while Lord Russell (the sitting Prime Minister) was sympathetic to an increase in the franchise Britain wasn’t ready for one-man-one-vote (and wouldn’t be until 1918).

Chartists were split internally, between those that believed change had to come from persuasion and rhetoric and those that agitated for direct action to force change. The most extreme example of this would be the Newport Rising in November 1839 the failure of which which led to arrests and the transportation of the ringleaders to Australia. By 1848 Chartism was on its last legs but one of its leaders, Feargus O’Connor, decided that the best way to achieve their aims was by a combination of public demonstrations and a petition to Parliament.
He called a mass meeting of Chartists at Kennington Common, south of the river Thames, to rally his supporters and then a march to Parliament to present the petition. It echoed the events of 1780 when Lord George Gordon summoned his rag bag of anti-Catholic protestors to the Common to rail against attempts to repeal anti-Catholic legislation. In the end his supporters ran riot for a week burning down several prominent buildings (including Newgate Gaol) and attacking the Bank of England.

This may have been in the minds of the government and public in 1848 (as would Newport of course) and a call went out for volunteer constables. Lord Russell pleaded with O’Connor not to address the rally and agitate the crowd, nor to march on Parliament. He also arranged for 8,000 troops to be on hand and 150,000 special constables.

The whole thing did little for the cause and Chartism died a death after that.

So now we know why there were so many men signing up to be specials in April 1848, but without this little bit of historical knowledge (which I remember studying as a schoolboy) nothing in this newspaper report would make sense.

One thought on “Huge numbers of special constables are sworn in London. Why?”