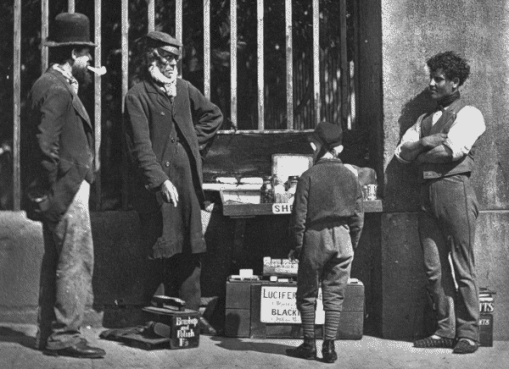 The Victorians believed that criminality was endemic in the working classes and that some offenders were beyond help. This informed a debate about the existence of a ‘criminal class’, reviewed and given impetus by the writings of Henry Mayhew at mid century. Just as there were those that ‘would not work’ there were those that lived by theft and violence. This depiction of crime had important consequences for those caught up in the justice system because by the 1870s the authorities had pretty much abandoned all attempts at rehabilitating prisoners and instead imposed ever more strict forms of discipline and penalties for breaking the rules.

The harsh nature of the penal system didn’t end when you left gaol. Under the terms of the Prevention of Crimes Act (1871) any prisoner released early on a ticket-of-leave could be arrested and presented before a magistrate on the mere suspicion (by the police) that they had done something wrong. Moreover, registers of habitual offenders were now kept which recorded previously untold details of thousands of individuals convicted of all manner of offenders by the Victorian state. Now then, a criminal record could dog your footsteps forever.

Not surprisingly this made it very hard for former convicts, like Thomas Briggs, to go straight. By March 1875 Briggs already had a  prison record. He’d served at least one term of penal servitude and had been up before the local Police magistracy on a number of occasions.

On Saturday 20 March 1875 he was there again, this time in Mr Hannay’s court at Worship Street in Shoreditch.

Briggs was an unlicensed shoeblack who  plied his trade on the streets. The 35 year-old was well known to the local police and it seems they were in no mind to let him live out an easy life. PC 250N was patrolling his beat near Shoreditch church at seven in the evening when he saw Briggs standing by his box looking for trade. According to the policeman the ‘black and his box were blocking the passage and he asked him to move along.

The real problem here was that Thomas didn’t have a license to clean shoes in the street and this was because the police refused to give him one. Every time they saw him on the street they move him on or confiscated his box, taking away his livelihood. Thomas then had to collect this from the police station , reinforcing his relationship with the law and reminding everyone of his criminal history. According to Briggs this happened ‘four or five times a week’.

On this occasion Thomas lost control of the situation and refused to move. When the PC insisted the shoeblack climbed the nearest lamp post and yelled abuse down at the copper below. He accused the local police of persecuting him; they knew he’d only bene out of prison for a few weeks and ‘pitched on’ him at every opportunity making it impossible for him ‘to earn an honest living’.

In court the constable told the magistrate that Briggs was ‘obstinate’, obstructive and abusive. He ‘collected a crowd about him, told the people his history to enlist their sympathies, and then said they should see him righted’.

Not surprisingly Mr Hannay took the police’s side in this. Briggs would have to confine himself to cleaning shoes only in places where the police allowed him to (presumably licensed ‘backs had more liberty of choice?). The magistrate told him he would be dismissed without further charge today but warned him that future transgressions would fall heavily upon him. He advised the policeman to bring him in as often as was necessary for the former convict to learn that rules were there to be obeyed.

Naturally we can’t know whether Thomas Briggs was an honest man caught up in an impossible system. He may have been a petty criminal who preferred an ‘easy’ way of life. However, his extreme reaction to being moved on again suggests that he might have had some mental health issues which would hardly have been identified as such in the 1870s as they would be today.

Nor would he have had any support on leaving prison; no probation officer or social services, or any form of state benefit. Recidivism remains a serious problem today when there are many more options open to those caught up in the criminal justice system – if Thomas Briggs managed to ‘go straight’ and stay out of gaol for the rest of his life then he would have been a quite remarkable individual.