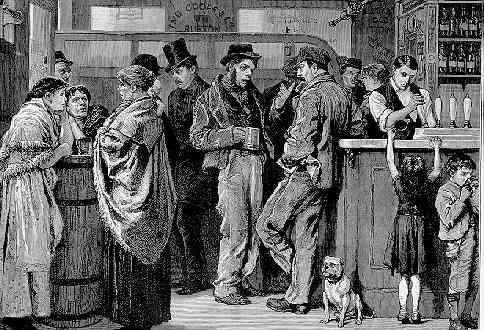 William Kirbyshire, of Aswell in Hertfordshire, had come down to London to get married. As he strolled along Regent Street a man stopped him and asked the way to Leicester Square. William apologised and he too was a stranger in the capital and regretted he was unable to help. The man thanked him and walked away. A few minutes later William decided it was time for some refreshment and he entered the next public house he came to.

As he propped up the bar nursing his drink he noticed the man that had asked him for directions chatting to two others. One of them came over and introduced himself as William Hook. Hook asked William if he ‘knew of any place of amusement where the evening could be passed pleasantly’. William mentioned a couple of places and Hook suggested they go there together, but the visitor to London declined.

Hook was seemingly persistent in making friends however and offered to treat him to a bottle of champagne, an offer that was soon lowered to beer. As the pair were joined by Hook’s companions, Peter Stevens and William Smith, the drink began to flow and very quickly the conversation turned to boasts of strength.

Hook declared that he could throw a ‘certain weight 30 yards’ and was prepared to put money on it. It took some persuasion but eventually William agreed to meet Hook and the others at a different pub later that day. When he arrived the three men were already there, and Hook bought them a round. They soon moved on to a third pub – this was turning into what we might call a ‘pub crawl’ – and Hook was in effervescent mood.

He stated loudly that he ‘thought nothing of spending £20 on a lark, as he could have £100 whenever he wanted it’.

The impression he was giving was a wealthy young man who had deep pockets. He was also luring the unwary Kirbyshire in however, and Smith and Stevens soon played their part in this.

As William and his new found chums began to toss coins (a simple game of chance) Smith leaned over and whispered to him that since Hook ‘had plenty of money, he might as well have some of it as anybody else’. William was ready to play and bet and won a shilling from Hook straight away. The others now persuaded him to carry on and managed to get him to lay a huge bet of £10 (about £500 today). Reluctant at first he was only convinced when he saw Stevens put down 5 sovereigns.

Hook won the toss and paid up but William he felt he’d been cheated. He claimed that a ‘plant had been played on him’ by the men and demanded his money back. When they gave him back a few sovereigns but refused to hand over the rest he called a policeman and had them arrested. The next day the four men all appeared before the magistrate at Clerkenwell Police court.

Mr Beadon, the justice, was unsympathetic. As far as he was concerned while the trio of gamblers were ‘known bad characters’ in the area and this was clearly a scam, they hadn’t actually broken the law. Instead William was simply a dupe and he had ‘acted in a very foolish manner in drinking and betting with strangers’. Hook, Smith and Stevens were discharged while William Kirbyshire slunk away to lick his wounds and put the whole thing down to experience.

London was a dangerous place for the unwary. It remains so today and visitors were constantly being warned to keep a close eye on their possessions in the crowded streets and not to take strangers at face value. One wonders what William’s future wife thought of the whole affair, if he even chose to tell her.