Most of us will own some device we use to play recorded music on for entertainment. We might use the radio (for classical, jazz or pop), or a CD player. Perhaps today the most people are moving over to streaming music via an internet music library service or from their own collection.

I imagine very few of us would hire a nine piece brass band to perform outside our house once a week before while we enjoyed lunch inside. However this is exactly what Mr Strawbridge, a City stockbroker did ,and it was causing some consternation in the fashionable London square where he lived.

In early March 1883 a German musician and bandleader, Joseph Deuchseherer, was presented before the sitting magistrate at Marylebone on a charge of ‘annoying a gentleman’ by playing music near his home in Blandford Square (home to the writer Wilkie Collins in the late 1840s – as pictured left). 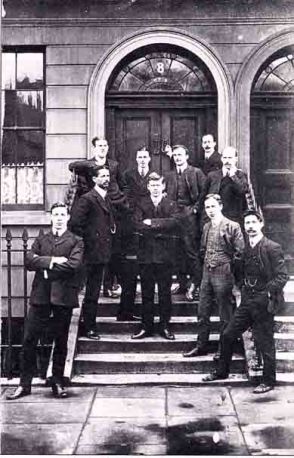 Joseph W. Comyns Carr was a noted art critic and champion of the pre-Raphaelite brotherhood. For the past ten years he had worked for the Pall Mall Gazette as their arts correspondent and, according to him, Fridays were the day when he wrote up his articles for the paper. Carr lived at 19 Blindfold Square and Mr Strawbridge lived at number 11, which was situated at right angles to Carr’s. Thus, while the band weren’t direct;y outside the ‘noise’ travelled any upset the critic.

Carr had no objection in principle to the musicians playing, it was just that they were hired to do so at an inconvenient time for him. He had suggested a number of alternative times to his near neighbour but these had been rejected. Moreover that Friday the band had been hired by another household between 10 and 11 so he’d had little or no respite from the music.

Finally, Carr decided enough was enough and went out to ask Deuchseherer to desist. The musician obliged but on consulting with the stockbroker who had engaged their services, they soon started up again. As a result a prosecution was brought and the German found himself before Mr Cooke at Marylebone Police Court.

The case was presented by Strawbridge’s lawyer (he was unable to attend) as one of principle; he felt Mr Carr was intent on having all street music banned. His private secretary appeared to insist that Mr Strawbridge was quite happy to take this case to a higher court to test this principle. He added that:

‘The band was an excellent one, as many of the inhabitants of the square would be glad to testify’.

Mr Cooke agreed that there was an issue to be solved here, whether or not it went further than his own court. He decided to bind the prisoner (Deuchseherer) over on his own recognisances for a week, presumably so that Mr Strawbridge could attend in person. Hopefully then the two gentleman of Blandford Square might be reconciled to each other.

for other examples of street musicians (albeit not large bands like Herr Deuchseherer’s) see the following blog posts:

Fined for disturbing a mathematical genius

A ‘hideous noise’ in the street and early concerns about immigration

Two Italian musicians in a row about a monkey

One thought on “‘Everyone’s a critic’: the German band leader at the centre of a row in Blandford Square.”