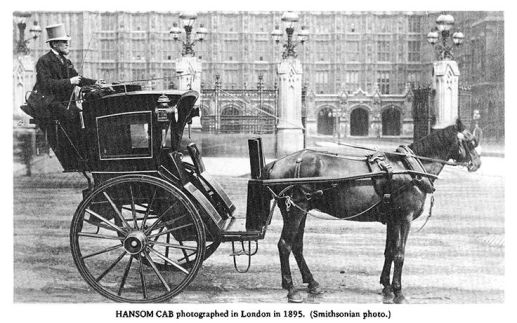 This case shows how statute law sometimes clashed with popular perceptions of how justice should work, even when the supposed ‘keeper’ of the law (the magistrate) felt that the law was wrong, or at least not fit for purpose.

William Loakes was a cab driver from Rotherhithe and this was his third appearance before the Southwark Police Court magistrate. Cabbies didn’t have a very good reputation in the 1800s, being described as surly and disrespectful, especially towards wealthier clients. They were not infrequently accused of overcharging or refusing to take fares where they requested to go.

But Loakes had done nothing wrong and had been coming to court to seek redress. He claimed he was owed 10s by a man named Thomas who had given his address asBor the Nag’s Head pub in Borough. He had come twice before to get a summons against the man but so far he had failed to trace him. No one  at the pub had any knowledge of him so William was back in court to ask for a warrant to arrest him.

The Warrant officer of the court told the magistrate that two summons had been served at the address but since ‘Mr Thomas’ (if that was his name) was not there they’d had to return with them. Mr Bridge was apologetic but explained that he didn’t have the power to issue a general warrant to arrest the fare dodger since that wasn’t a crime under the terms of the Hackney Carriage Act. The act, passed in 1853, set out plenty of regulations for the operators of cabs but failed (in Mr Bridge’s view) to protect the drivers from non-payment by their customers.

‘Cabmen were liable to severe penalties if they broke their contracts, and the parties that hired them should be treated the same way’, said Mr Bridge. He added – using the fact that his words would be reported – that he thought it high time Parliament looked at the law and changed it according to give magistrates more powers to deal with this.

There was little he could do for Mr Loakes however, who had already lost three days work sitting around in Police Courts trying to get his 10s. He suggested the matter be communicated to the Commissioner of Police in the hopes he might use his influence to get the law changed. Finally, he granted the cabbie a third summons for free and Mr Loakes left court after thanking the magistrates ‘for his kindness’ (but probably grumbling under his breath about the unfairness of it all – he was a London cabbie after all).