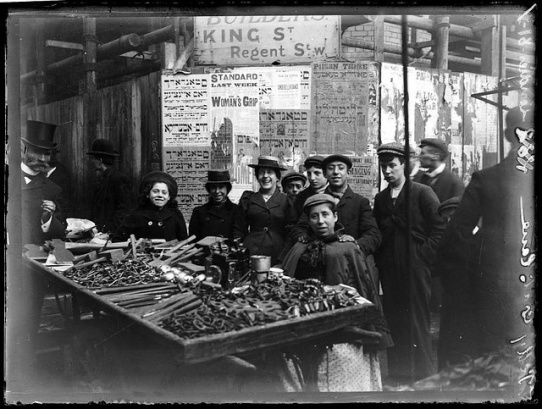 The newspaper reports of the late Victorian police courts offer us a window into a past society. They throw up all sorts of things that can seem strange, or familiar to the modern reader. London is revealed as a busy and bustling city with all sorts of opportunities for conflict between its denizens. We get an idea of how people lived, where they worked, and how they moved around. We can also see that the capital was, as it is today, one of the world’s most multicultural and vibrant cities.

The East End of London had a large and well established Jewish community. Many of London’s Jews were fairly recent arrivals; coming over during the late 1870s and 1880s to escape persecution in eastern central Europe. Jews living in the Russian Pale (modern day Ukraine, Belarus, Lithuania, Moldova, Poland and some parts of Latvia and Russia) were oppressed by laws which prescribed where they could live, how and when they could work, and that forced them to serve in the armies of Tsarist Russia.

Life was extremely hard in the Pale of Settlement and communities were subject to periodic violent outbreaks of anti-semitic pogroms. Not surprisingly tens of thousands chose to leave their homes and travel across Europe in a search for a better and safer life. Many settled in London, particularly around Whitechapel where they established a community, while others tried to find the money to pay their passage to the ‘golden medina’, the United States of America.

London was no paradise however. Prejudice here was rife and periodic instances of anti-semitism continued to plague the Jewish community. But it was not as lethal as the oppression they had suffered in the Russian Empire, nor was the poverty as grinding. Hard work and persistence meant that the Ashkenazi people of the East End set down strong routes in the capital of Empire and gradually moved out of the East to the North and West of London as their prosperity grew.

In 1897 we get a glimpse of this community and, at the same time, a contemporary English view of them and their traditions. I wouldn’t say the report is racist or ‘anti-alien’ (to use a late Victorian expression) but it does perhaps reflect a contemporary curiosity about the ‘other’ in society.

In January 1897 Joseph Moseley, a Jewish sponge maker, appeared at Thames Police Court to prosecute a summons against Evelina Cohen. The pair had met in January 1896 a year earlier and after a brief courtship Joseph had proposed marriage. He gave Evelina a valuable  diamond engagement  ring and another ‘buckle’ ring as a symbol of their friendship. They agreed to marry in March of that year.

However, something must have gone wrong or Evelina changed her mind because instead of marrying the sponge maker, she married someone else in March 1896 leaving poor Joseph high and dry, and missing two rings. This was why he took her to court.

Mr Dickenson presided at Thames in early 1897 and he was less than pleased that this case had come before him. It did no credit to either of them, he said, to be dragging each other through the courts in this way. He understood that it was the ‘custom among most people, especially ladies, to return rings when an engagement was broken off’.

‘It would be a graceful act on the part of the young lady’ he said, ‘to say “Take back the ring thou gavest,” and give the complainant [Joseph] the diamond hoop, keeping the buckle ring as a trophy of her conquest’.

Moseley was represented by a lawyer, Mr Deakin, who explained that the matter had now been settled. The magistrate was pleased to hear it: ‘half a loaf was better than no bread’ he added referring to the return of one of the rings. Deakin wasn’t convinced that the sponge maker had recovered much from the encounter. ”In this case’, he grumbled, ‘it is only a fifth of a loaf’. After all he had hoped to marry and benefit from Evelina’s dowry, which was reported to be £500 plus a property.

The whole report smacks then of a business deal reneged upon rather than a man jilted ‘at the altar’. The fact that this had to go to law would seem to reflect contemporary negative views of the Jewish community as being built around trade and money, with this being seen as a ‘bad’ thing. Joseph had missed out of a ‘good deal’  and was now trying to get his investment back and I suspect many middle-class English readers reading this had some of their prejudices affirmed by the whole episode.