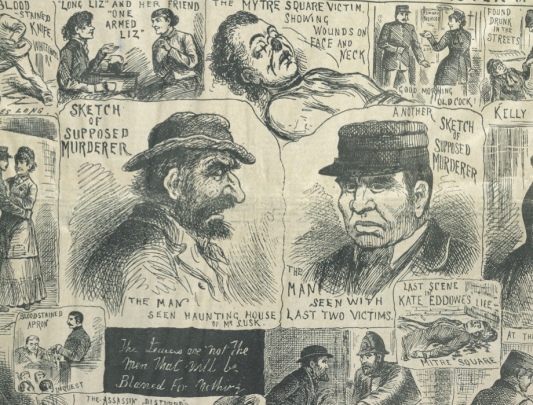 Today I am spending most of my time in Whitechapel planning out a history trip for my undergraduate students. This is something I do every year – take a party of students studying my third year module on ‘Crime and Popular Culture’ in the nineteenth century to visit the sites associated with the ‘Jack the Ripper’ murders. Plenty of commercial walking tours exist of course, some much better than others.

Personally I’m not a fan of the exploitative type that thinks that projecting an image of a dead woman onto the brick walls of modern Spitalfields is appropriate. I’d much rather listen to an expert who can impart some context and tell the audience about the history of the area and its peoples as well as treat the murder victims with the respect they deserve. Those tours do exist, so if you want to take one do some research before you make your choice.

I don’t have the luxury of being able to pay for a commercial tour so I do it myself. But Whitechapel is constantly changing so I need to revisit the place regularly to see what changes I need to make to my route. This time however there is added piquancy to my trip because I have almost finished making the edits to my first draft of a new ‘Ripper’ book. This has been written in collaboration with a former student of mine who thought he had a new solution to the world’s most infamous cold case. Andy has done the research on the murders and has added several to the original police file, while I have concentrated on the social history to provide context. We have a draft manuscript, all we need now is a publisher…

Anyway, back to Whitechapel and back to 1888 and a month after Mary Kelly became the fifth canonical (but not , we argue, the last) victim of ‘Jack’, what was happening at the Worship Street Police Court? Worship Street (along with Thames) served the East End and several of the murdered women in the ‘Ripper’ series appeared here on a variety of cares relating to prostitution, disorderly behaviour and drunkenness in the late 1880s.

Joseph Isaacs, a 30 year-old cigar maker, was charged with theft. His name suggests he belonged to the large immigrant Jewish population of the area which have been closely associated with the murders. Quite early on a man named John Pizer was arrested on suspicion of being the killer. Pizer (who was also known as ‘leather apron’ – a local man with a reputation for threatening prostitutes). Pizer was able to provide an alibi and was released but some experts still believe he may have been the killer.

The idea that the murderer was a Jew was helped by widespread anti-semitism and the belief that ‘no Englishman could do such a thing’. Xenophobia, racism and anti-immigrant tension suffused society in the 1880s and the killings brought all of this to the surface.

Joseph Isaacs was accused of stealing a watch. He had entered a shop in the West End of London holding a violin bow. He asked the shop’s proprietor, a Mr Levenson, if he could repair the bow. As they discussed the transaction however, Isaacs suddenly ‘bolted out’ of the shop. Mr Levenson quickly realised that he stolen a gold watch and raised the alarm.

Isaacs was arrested some time later in Drury lane but not in connection to this offence. He’d been picked up because his appearance seemingly matched the description offered of a man seen near Mary Kelly’s home on the night of her murder. At Worship Street Police court Mary Cusins, the deputy of a lodging house in Paternoster Row, Spitalfields, testified that Isaacs had stayed there for ‘three or four nights’ around the time of Kelly’s murder.

‘On the night of the murder she heard him walking about the room’. She added that ‘he disappeared after that murder, leaving the violin bow behind’.

All this had emerged as the police made house-to house enquiries in the wake of the murders. The police have ben widely criticised for their failure to catch ‘Jack’ but most experts now acknowledge that they did all the right things things at the time. Without forensics, and chasing a man that attacked strangers, they had very little to go on and were really dependent on the killer making a mistake. Jack didn’t really make any mistakes, however, and eluded the growing cordon that the combined force of the Met and the City Police threw out to trap him.

Isaacs was remanded by the sitting magistrate at Worship Street (Mr Bushby). He had allegedly stolen a watch but there was no sign of it. But more importantly Detective Record said that he still had some questions to answer with regards to his movements around the time of Mary Kelly’s murder. Isaacs appeared a week later, again in the company of Detective Record. He had been cleared of any involvement in the Ripper murders was convicted of stealing Julius Levenson’s watch and sent to prison for three months at hard labour.

Another possible suspect eliminated and another line of enquiry completed, the men of H Division’s search for the world’s first serial killer continued…