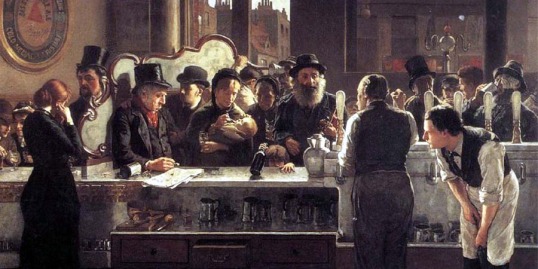 John Henry Fielding, (somewhat surprisingly) described as a German and who spoke with a German accent, had only been running his local pub for three weeks but soon found himself hauled before the Thames magistrate for breaking the licensing laws.

On Sunday 27 September at around  lunchtime detective Dunaway of H division, Metropolitan Police, was passing by the White Hart pub in Chamber Street, Whitechapel. He may have been watching the establishment because it had a long established reputation for out of hours drinking, and detective Dunaway (129H) soon noticed that something wasn’t quite right.

Fielding kept opening the door of the pub to admit customers or let them out, always urging them to be quick about it. Seeing Dunaway watching him Fielding assumed he was another customer. He called over to him that he couldn’t let him in because it was already too crowded inside.

The detective called to a uniformed officer nearby, Patrick Geraghty (20H), who crossed over and banged on the pub door.

‘Who ish dat knocking at mine door?’ [sic], demanded the German.

‘The police’ replied PC Geraghty, throwing the landlord and his drinking den into a panic.

According to Geraghty (and one wonders how he was able to know this since he was outside at the time):

‘There was a rush of people into the cellars, and upstairs rooms immediately. Pots of beer, gin, and rum were hastily poured into he sink under the beer machine, and after a delay of two minutes, Geraghty was admitted, and found the defendant “hussing” the people down the cellar stairs’.

Several people tried to escape being caught in an illegal drinking session by rushing past the policeman and some even leapt from the first floor windows. Two or three of these fell awkwardly and ended up in hospital.

The magistrate, Mr Partridge admonished the landlord: ‘This really is too bad – an open defence of the law’, he told him. Fielding was suitably chastened. He apologised and promised it would never happen again. This is when it emerged that he was new to running this pub. His saviour was Inspector Holloway, who had sought the summons to bring him to court in the first place. The pub was notorious he told the justice, but the German was new and this was his first offence. Mr Partridge took this into consideration and instead of the £5 he had intended to impose he fined Fielding 40s. The penalty was paid immediately and the German publican hurriedly left the court.