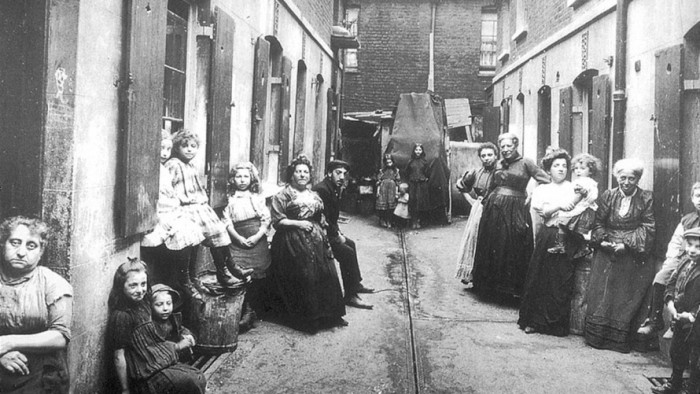 Today’s post is a sadly typical tale of domestic violence but one that also sends some light on immigrant communities and working-class attitudes towards marriage and illegitimacy in the 1860s. We shouldn’t assume, for example, that everyone married in the past, even when they wanted to start a family. Nor does it follow that migrant families were more socially conservative than those of the indigenous English population. Instead what we can find is that there was a much greater degree of continuity in relationships than a discourse that sees the 1960s’ ‘sexual revolution’ as a dramatic catalyst for changing moralities.

At the beginning of October 1867 a German shoemaker named John Martz was brought before the magistrate at Thames Police Court in the East End. Martz may have been a Jewish immigrant but we can’t determine that with any certainty from his surname. We do know that he was cohabiting with a woman who also came from Germany however, Sarah Leiss and given they have migrated to East London it is at least plausible that  they were members of the growing German Jewish population of Whitechapel.

Whilst John and Sarah were not married they did have two children, one of them an infant. On 1 October Sarah appeared in court with her baby in her arms to accuse Martz of beating her. He had come home drunk on the previous night and ‘scolded and swore at her little boy, and threatened to beat him’. When she tried to take the boy away he grabbed it and threw the child down the stairs. Thankfully the boy was uninjured but it was this act of violence that probably prompted her to come to court.

It was not the first time he had hit her or threatened the children and it always occurred when he had been out drinking. It was a familiar story and Mr Benson, the justice, had heard it all hundreds of times before.

‘I have left him several times’ Sarah replied, ‘and he comes after me again. He drinks very hard, and I can’t get rid of him’.

When sober, she added, he was a ‘very good man’ but when he was intoxicated, he ‘was furious and cruel’.

On the night in question Martz had been seen coming out of his house Merton Place, St George’s-in-the-East, brandishing a knife. PC Joseph Newman (166H) had shouted to him as the shoemaker approached, warning him to drop the weapon. Drawing his truncheon he declared:

‘If you advance another step with that knife I will murder you’.

This had the intended effect and a terrified Martz dropped his knife in the street.

In court Martz needed a translator to make sense of everything that had been said and in his defence merely said he had been drunk and wasn’t aware of what he was doing. Mr Benson instructed the interpreter to explain carefully to the shoemaker that he was clearly responsible for more than one act of violence and that he must now find sureties for his good behaviour towards his wife for three months. If he failed to find two persons that would vouch for him and pledge money then he would go to prison for 14 days.

If Martz was (and I expect he was)  the main breadwinner then a term of imprisonment, whilst giving Sarah some peace, would have severe consequences for her and her children. Hopefully this brush with the law would chasten the German and provoke a change in his behaviour. But it does have the feeling of trying to place a sticking plaster over an open wound; a case of doing the minimum without really trying to solve the situation.

It is the other elements of the case that I find useful as a social historian; the detail that John and Sarah were not married, the open statement that they had children together nevertheless and cohabited, with no comment being passed by either magistrate or the papers. This seems very ‘modern’ but perhaps the reality is that marriage (and divorce) were luxuries that many very poor working class Londoners could not afford in the Victorian period.