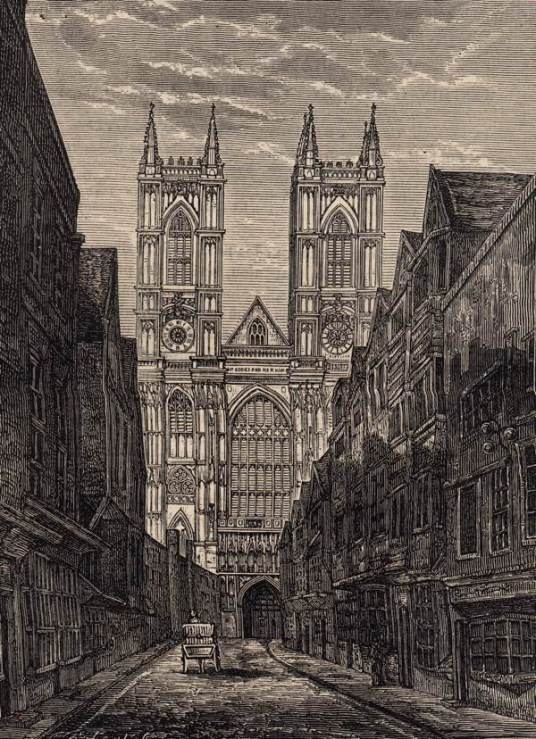 Tothill Street, Westminster in the early 1800s (from http://spitalfieldslife.com/2014/04/01/more-long-forgotten-london/)

London was a huge draw for visitors in the nineteenth century, especially after the nation’s railway network was built. London was also the country’s criminal justice hub and many of those sentenced to terms of penal servitude were processed in the capital before being sent to institutions as far away as Devon or the Isle of wight. So Daniel Mahoney, a principal warder (prison officer in today’s terminology) at Dartmoor may have been in the capital for work or pleasure. Regardless of which it was he soon fell victim to one of the oldest tricks in the book.

As he was walking in Tothill Street (not far from where St James’ Park station is today) he was ‘accosted’ (his words) by Mary Brown. Mary was a ‘woman of the town’, a prostitute, but Mahoney (who was wearing his uniform) later made out that he didn’t realise this at first. According to the warder Mary asked him if he was looking for somewhere to stay and when he said he was she ‘told him she would take him to a nice clean place’ and went with him to an address in Orchard Street (near Marble Arch).

Once at the house she asked him if ‘he would treat her with some gin’. This was part of the usual transaction of prostitution and for Mahoney to later pretend otherwise was risible. Gin was fetched and two other women joined the party. The warder relaxed and took off his neck-stock (an uncomfortable early version of the stiff collar) and placed it on the table along with his handkerchief, watch and a purse of money.

Without detailing what happened next it must have been pretty obvious to the readership of The Morning Chronicle that Mahoney was enjoying the company of these ‘ladies’ and not paying attention to the danger he was in. London’s prostitutes had been decoying men into low lodging houses, getting them tipsy and parting them from their valuables for hundreds of years and a prison officer must have offered a particularly tempting prospect.

Before he realised what was going on the women had seized his goods and ran off with them. The next day (after Mahoney had reported the theft to the police) one officer made his way undercover to Orchard Street to make some enquiries. He probably had a fair idea from the warder’s description of who he was looking for even if Mary had not revealed her real name.

As police constable John Toomer (221B) strolled along Orchard Street Mary Brown came out into the street from her lodging at number 57 and spoke to him. Seemingly not realising who he was she started to brag about her successful exploits the night before.

Clutching a glass of brandy, ‘She told him she’d had  “a good pull” on the previous night’, that her victim was  ‘one of the Penitentiary officers; and she had got £3 10s in money, a beautiful watch and gold guard, and other things’.

The policeman asked her what she had done with he things and she admitted passing them on to one of her ‘companions’, Emma and spending some of the cash.  She then invited the policeman to go and have a drink with her. He agreed so he could pump her for more information and they walked on for a while. However, as soon as they got within striking distance of the nearest police station PC Toomer revealed himself and took her into custody.

Charged with robbery before the Westminster magistrate (Mr Paynter) Mary denied everything. In her version of events she had summoned by the warder to a house in Almonry. He had apparently paid a lad a shilling to fetch her, for sex one presumes. He had left his handkerchief there she told the justice. Thereafter they had continued on to Tothill Street where they met up with some other women and the warder bought them all something to drink. The last time she had seen Mahoney he was enjoying the company of one these women in a room in Orchard Street but Mary had left and knew nothing of the robbery.

Whatever the truth was the weight of evidence was fairly damning for Mary; especially her supposed confession to the plain-clothes policeman. But Mahoney did not come out of this very well either. The magistrate said he ‘was sorry to see a person of the prosecutor’s official position capable of such conduct’. He remanded Mary for a week for further enquiries.