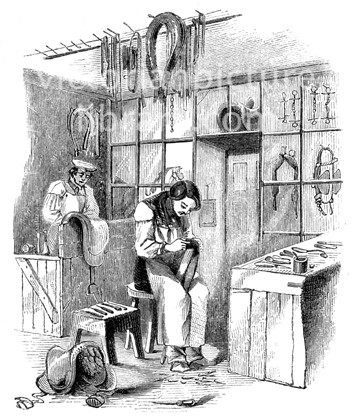 Francis Harben and George Parr both worked for as a harness maker in Kensington but their relationship wasn’t good. Parr had quarrelled with Harben’s uncle (about what it is not clear) but the two young men (Parr was 20) hand;t spoken to each other in weeks.

At half past four on 31 July 1881 Harben entered the saddler’s shop at 10 Holland Place to ‘brush his clothes’. Parr was already there and, seemingly without provocation, he ‘sprang upon him’ and attacked him.

The attack was brutal and almost deadly:

Parr ‘caught hold of his throat and pushed him against the wall’, Harben ‘struggled to get away but [Parr] picked up a leather-cutter’s knife from the board and stabbed him in the throat with it’.

Harben was then stabbed in the back of head and three more times in the face and neck. As he fell to the floor he dragged his attacker down with him and the pair wrestled for some moments before Harben managed to escape.

At no point did the other man say anything that might explain his ferocious attack on the harness maker. PC Northover (T415) eventually arrived at the shop and found the attacker himself bleeding profusely from a wound in his throat. He helped Parr get to the St George’s Hospital where he was treated for his injuries. Soon afterwards Harben also arrived at the hospital having been helped there by some passers-by.

The surgeon that rated them said that Harben was ‘in a state of collapse, suffering from great loss of blood’ and he kept him in hospital for several days before he could appear at the Hammersmith Police Court as a witness against his work colleague. As for Parr he too was close to death with ‘a dangerous wound, [that] must have been done with considerable violence’, he later told an Old Bailey courtroom.

At Hammersmith Parr was charged with ‘cutting and wounding’ and with attempted suicide. The suggestion was that he had, for no stated reason, attacked Harben and then turned the knife on himself. Parr had no recollection of doing anything and so his mental health was called into question. Mr Shiel at Hammersmith committed him to take his trial at Old Bailey and there the house surgeon at Newgate was called to speak to his mental state.

Mr Rowland Gibson did not think that Parr was ‘mad’: ‘the prisoner appeared to be perfectly placid, and quite rational’ when he examined him he said. He ‘had lost a great deal of blood, and was very pale, and is now—the loss of blood might take away his memory for the time—he offered no explanation of how the thing occurred—he said he could not remember anything about it’.

Parr was charged with attempted murder and inflicting grievous bodily harm and tried on 12 September 1881. The jury acquitted him of the first charge but found him guilty of GBH. The judge handed down a sentence of penal servitude for five years.