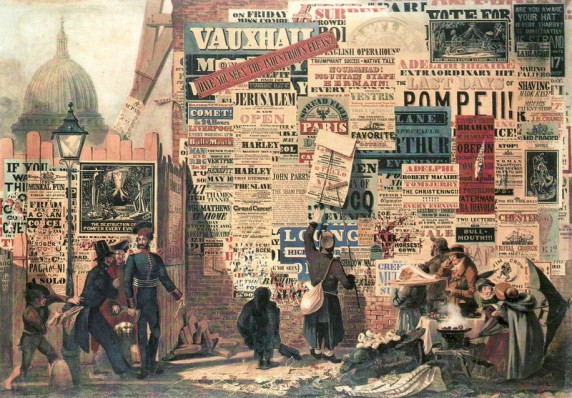 It was not Edward Barnbrook’s first time in court. He had appeared before the magistrates at Marylebone Police court on a number of occasions. He was described on the charge sheet as having ‘no home’ and ‘no occupation’, but he certainly believed he had an important task to complete.

– ‘defacing walls and hoardings by chalking verses from Scripture on them, [and] also sentences  satirising our statesmen and country’.

In late August 1861 he was brought up before Mr Mansfield having been arrested by PC Gaze (356S) between one and two o’clock that morning in Little Albany Street, close to Regent’s Park. The constable had interrupted the men while he was chalking a message on a wall. What was that message, the magistrate asked.

‘What nation can fight?’ replied the policeman to stifled laughter in the courtroom. Since Barnbrook had refused to stop writing the constable had arrested him and taken him back to the station to charge him.

Thomas Taylor, a man with the wonderful title of ‘inspector of nuisances’ appeared next, to explain that Barnbrook was  serial offender and his daubing was a constant source of irritation to local residents.

Mr Mansfield asked the slogan writer why he did it.

‘Prisoner (solemnly): To fulfil the prophets and prophecy, also the saints, and to make the Bible universal. I have a mission’.

Religious zeal was as prevalent in Victorian society as it appears to be in our own and seemingly dismissed or tolerated as harmless unless it was attached to violence. The magistrate remanded the prisoner for two days. In effect the man was being imprisoned without being convicted of any offence,a fairly standard practice for those caught doing something but not really guilty of doing that much.